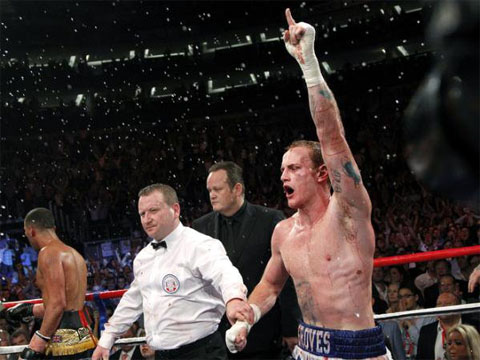 The O2 centre is a great boxing venue and Frank Warren did a very good job of promoting last night’s feast of boxing.

It’s a shame that Nathan Cleverly, who is now World WBO champion, was reduced to co-main event status but James DeGale and George Groves had also done a great job promoting their fight. The media interest was hyped up expertly and the fight did it justice in the end.

I was sitting between former World champion Enzo Maccarinelli and European champion John Murray, when English champion Tyson Fury and British champion Derek Chisora got into a scuffle ringside.

Fury was bare-chested and looked more like a man who just came out the pub than a future world champion but make no mistake about it – this fight is good for British boxing; let’s just hope it happens this summer.

Of course hype and bravado are a pivotal part of the boxing fabric. Frankie Gavin keeps calling me out and be careful what you wish for young lad – you might just get it.

I have watched only two of Frankie’s fights and he hasn’t impressed me. But having said that, Prizefighter winner Michael Lomax and former British Champion Young Mutley should be ashamed of the performances they offered against him. They seem like they just turned up for a pay cheque.

I have fought all over the world and beaten world-class fighters on their promoter’s show, so if Frankie and I were to fight in the future on a Frank Warren show, I am very sure I would beat him.

But at this minute in time I am not looking behind me, I am looking in front and fighting the European or world champion is my focus.

Frankie can get to the back of the queue as I have a voluntary fight due and then the winner of the Steve Williams v Nigel Wright fight – who are due to battle it out for the mandatory spot.

I will defend my British title three times to win the Lonsdale belt outright and then move on.

Frankie called me out on Sky Sports during his interview and then Frank Warren TV interviewed us after he was finished with Sky Sports. But Frankie’s fight against Young Mutley was a ‘snooze fest’ – he needs to add some flair to his game as right now as he is boring to watch.

He has nothing to bring to the table and I have no desire to fight him until he wins a world or European title.

Nathan Cleverly didn’t look amazing last night either but that is understandable after the week he has had and not knowing who he was going to fight.

Even so, I just don’t see Cleverly beating the world’s best light heavyweights at the moment; the likes of Bernard Hopkins, Travis Cloud, Chad Dawson and Jean Pascal.

But you never know. Stranger things have happened.

In the main fight, there was huge support for George Groves in the Arena – which might have been significant in the decision against James DeGale. James seemed to be the stronger of the two and rocked George on occasions but I was right near George’s corner and they were telling him to box and move and not to engage. These were great tactics and they worked, as when George stood and traded he usually ended up on the wrong side of the exchange.

Everyone ringside didn’t know who was winning as there were many close rounds and I would have agreed with judge Richard James Davies and scored it a draw – that would have been fair.

James can, and will, come back from this. As I said in my last blog, Nigel Benn lost to Michael Watson when he was the favourite and he went onto win two world titles afterwards.

The 168lbs Division is hot right now; George should move on from this win and target a European title shot and then a world title shot. George had the Arena chanting ‘Georgie Georgie’ and he most certainly came out of this ‘The Star’.

Like I also said previously, I felt DeGale was the favourite but I wouldn’t be surprised if George won. I wish him the best as he’s a nice kid; it is always nice proving the experts wrong so I know how he currently feels – I have pulled that feat off with beating DeMarcus Corley, Delvin Rodriguez and Lenny Daws.

John Murray and Kevin Mitchell were in attendance to hype their 9th July fight and I had a chat with John ringside. He seems like a good guy who just wants big fights. Whoever wins will also go on to challenge for a world title so it’s a good time for British boxing, and I’m looking forward to making my mark in the next year.

Hats off to Frank Warren for putting on a very good evening’s entertainment despite the only real fight being Groves Vs DeGale, and it was also good to see former WBU, European, British and Southern Area champion there – Wayne Alexander.