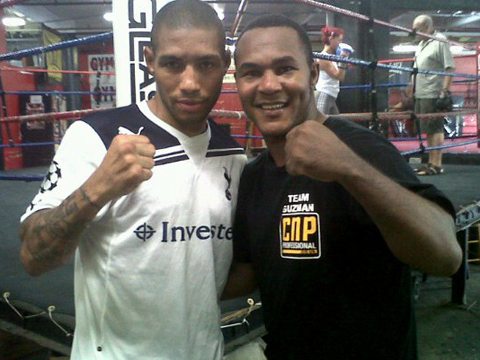 My first full week of camp in New York City has been one full of hard work and positive news, as I step up my training in the blistering heat.

I’m alternating my time between Gleason’s gym and Paerdegat Gym in Brooklyn and this NYC heat, combined with all the hard work, is helping the pounds fly off my body.

I had my first sparring sessions this week and this is the stage when the hard work really starts to pay off; quality sessions with brilliant boxers to hone and polish the technical work with my trainers Harry and Jihad.

I love coming over to the States, as I have said many times before, and once again it is proving to be of pivotal importance in my entire training schedule.

I was asked on Rope-A-Dope Radio earlier in the week (if you missed it check it out here on www.ropeadoperadio.com) as to why coming to the US is so important for me and what it’s like being a British boxer coming over here to train.

The answer is simple. This is what I dreamt of as a child – campaigning in America, being the reigning British champion and testing myself against the best in the world. When I was young I admired those that came to the USA to ‘up their game’ and took the step from good to great.

I would love to be where Amir Khan is in 12 to 18 months, and with hard work anything is possible.

Although David Haye and Amir Khan are England’s other World champions, what Carl is doing is ‘superstar-worthy’. Don’t get me wrong, David and Amir are not far behind, especially given the feeling I have that David will knock out Klitschko and Amir will add the IBF title to his WBA championship when he beats Zab Judah (on the same night I defend my British title).

Like myself, now is that time of extreme focus for David and Amir; the calm before the storm where the noise starts to increase and distractions need to be put aside.

Whilst in camp I intend to drop 10lbs through eating healthy and training hard. My normal training regime at home is pretty intense anyway but this week has seen NYC reach 100 degrees and it has been that much harder.

Over the next two weeks I have my diary full of sparring in New York City, with sessions in Brooklyn, Queens and the Bronx. There is a competitive environment here and I really enjoy it as everyone wants to see how good they really are.

There was also a little surprise this week as one of my current favourite fighters, Joan Guzman, is back training in Gleason’s gym. It is always a pleasure to be in his presence and I thoroughly enjoyed sparring with him a couple years ago.

On Tuesday I was offered a slot on the undercard of Floyd Mayweather Jr’s long awaited comeback fight against WBC World champion Victor Ortiz.

Floyd announced his comeback fight on his Twitter page at 12pm and a few hours later I was notified that Golden Boy Promotions had enquired if I was available to fight on September 17th, as part of the televised portion of the show.

It was a huge opportunity and I was hoping for a big name – but when I was told Jessie Vargas, I turned it down instantly. To me it felt like it could have been the Danny Garcia fight all over again, with Vargas not having a world ranking and me having nothing to gain from a win, but everything to lose.

The fight is over eight rounds and that was not appealing to me.

But just to get the call that they wanted me on the show was a good feeling, as the event will be televised in one million homes across America. Unfortunately that alone does not make it a fight that I simply cannot refuse.

I was offered a fight with Victor Ortiz back in September 2008, when I had just beaten former World champion DeMarcus Corley. The timing then also wasn’t right as I was only given two week’s notice.

It all goes back to that focus again. Sometimes you have to resist the temptation to take fights which look extremely tempting.

My opponent for my British title defence on the 23rd July will be announced next week and the four fighters I would like to see put in the hat for this voluntary defence are former European champion Colin Lynes, former World champion Junior Witter, former British champion Barry Morrison and Commonwealth champion Lee McAllister.

And whilst all of this is happening, European champion Jason Cook and English champion Nigel Wright will be contesting in a British title eliminator by October to earn the right to be my number one challenger.

It’s a hard one to call but I edge towards Jason Cook winning as Nigel Wright seems to fade badly in championship fights due to poor conditioning.

But all of these fighters would provide the next few fights with that little bit of extra incentive for me, as all involved have something to ‘give’.

Talking of that ‘little extra’, Gavin Rees fought on the same night as Carl Froch in Wales and scored a win over Andrew Murray for the European Title. Gavin started sharp and looked like a class act but he started to tire and Andrew won a few of the late rounds. Conditioning is an important part of being an elite boxer. You can have all the skills in the world but if you slack or cut corners in the gym, you will get found out at top level.

When I first came to the US to train I was completely unknown, and people were queuing up to spar with me and beat up the ‘fresh meat’. You have to earn your stripes, work hard and prove yourself to gain respect.

It has been a valuable lesson for me over the years and I still keep the mentality that nobody is going to do me any favours. It keeps you sharp.

I’ve sparred Andrew Murray a few times over the years and I felt that Gavin would be too experienced for him and that proved to be correct.

Mr. Akay, who set up the club in 1974, has always been there for me and he is a great inspiration in my life. He received a MBE from the Queen in 2000 for his work at the gym and the club has produced amateur and professional champions throughout its thirty years.

There will be events over the next few months as we fight to save the club that we love.

Back to Yassine, we are also both trained by Don Charles at MyGym in Finchley.

Don Charles has had three British champions in Derek Chisora, Ajose Olusegun and myself – and has now added a Prizefighter winner to his stable. He is definitely a rising coaching talent in the world of boxing.

Before the event everyone was talking about the former champions but I have sparred with Yassine and knew that they would need more than three rounds to work him out.

They both know how to win. And I’m no different.

And with it all eyes are now turning to the 23rd July and I can’t wait to get back in the ring.

Tickets are now on sale for my British Title defence at Wembley Arena on Saturday 23rd July – buy them now online at http://ashleytheophane.com/tickets/