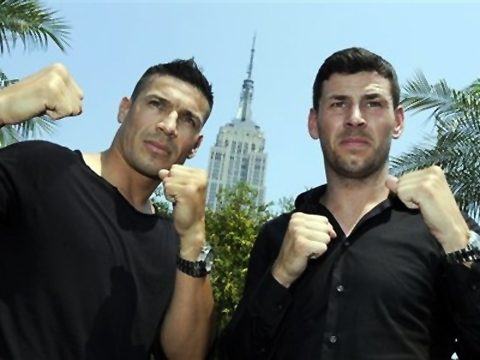 Martinez is a mature 36 years old, and in the form of his life. He has recent big wins over Kelly Pavlik, Paul Williams and Serhiy Dzinziruk.

He has in the past visited the UK and beaten Richard Williams twice and dealt with Adrian Stone.

Darren Barker is 29 years old, but perhaps lacks the big level experience that Martinez has. He won the British and Commonwealth titles with wins over Ben Crampton and Darren Butler.

Darren added the European title belt to his waist with decent wins over Affif Belghecham and Domenico Spada.

Hardly world class opponents, but good wins all the same. Darren is seriously talented and he might just rise to the occasion and pull off the win of his life, but I think the odds are heavily stacked against him.

I’m a big fan of Darren’s, having sparred with him in 2006, he had great speed and super skills. I knew from then that he had the ability to go all the way to a World title.

There is no substitute for experience and Martinez has fought at a higher level and beaten some class opposition. I think this has come just a little too early for Darren, but I admire him for jumping at the chance, it might never come again. Even if he loses, he can still come back to tend to his unfinished ‘local’ business with Matthew Macklin, which is a good enough match to be a World title eliminator.

Back to the fight, Sergio Martinez messaged me in the week that he would knock out Darren and I found it very hard to argue with him.

My guess is that Martinez will probably take over from the fourth and end it by round eight but I honestly hope I’m wrong, because it would be great for Darren and British boxing if he could pull this off.

Every fighter dreams of fighting the best and that is exactly what Darren is doing. There will be no shame if he loses as he’s good enough and young enough to bounce back.

My very good friend, Ajose Olusegun, steps up to take part in a World title eliminator this Saturday in California and a win will make him the WBC champion, Erik Morales’, mandatory challenger. He deserves this and I believe Ajose has the beating of Erik, should the WBC ever sanction them to meet.

I have been sparring with Ajose over the last ten years and I have learnt so much from him, and I have seen and experienced his talent at close quarters. We have easily completed over a thousand rounds sparring with one another.

Over the years it was clear that despite beating everyone put in front of him, Ajose was becoming frustrated with the British fight scene. Having won British, African and Commonwealth titles, the big fights he deserved were eluding him.

I would go to see his fights only to leave disappointed, as our sparring sessions were way better than his actual fights. He was never really stretched, and found his opponents way too easy and therefore would box a little within himself.

I helped Ajose with ‘ultra-competitive’ sparring for his two wins over Nigel Wright, and it just so happens, that next up I have to defend my British title against English champion Wright.

Nigel has won all his fights since losing to Ajose, but I believe I am better than any fighter he has beaten, and therefore I’m very confident that my mandatory defence against him will be a straightforward affair for me.

I was strongly of the opinion that Jason Cook would have beaten Nigel if they had fought in the eliminator which was planned before I fought Cook.

This will be Nigel’s third challenge for the British Title and I will ensure it will be his third disappointment. Nothing at all personal – strictly business.

Nigel is a good fighter but you need a little extra something to be a British champion.

After beating Nigel, it would great to get it on with either Frankie Gavin, Commonwealth champion, Lee McAllister, or maybe even a rematch with Lenny Daws in order to win the Lonsdale belt outright.

The new season is under way and Frank Warren has created some excitement with his new weekly Fight Night with Box Nation. This adds to Ricky Hatton’s Promotions hugely innovative approach with You Tube and Eurosport and given Matchroom’s Prizefighter the fight scene in the UK clearly leads in Europe and probably everywhere outside of the USA.

I cannot remember a time when so much boxing will be shown in a season.

Carl Froch and Amir Khan are leading the way on the World scene with Ricky Burns, Kevin Mitchell, Kell Brook, Nathan Cleverly, Paul McCloskey and confidently, myself looking to make our own waves on the World scene.

Katsidis has fought some of the World’s best but always falling short when it really counts, but against British opposition he is two up, with crushing wins over Graham Earl and Kevin Mitchell.

Ricky will need to be on top form but he can pull it off.

This is the real Champions League.