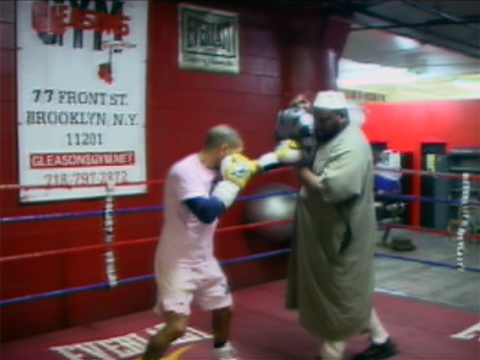 This is my sixth week of training camp in New York City and the intensity is getting towards boiling point. This will be my hardest week of sparring.

I will be working with world class operators. 122lbs WBC world number three, Leon Moore, 130lbs IBF world number five, Argenis Mendez and former 140lbs world number three, Francisco Figueroa, through Monday to Friday. I may even get some rounds with my friend, 140lbs WBC number one, Ajose Olusegun, as he is back at Gleason’s gym.

I had my first day off in five weeks on Sunday in order to restore my energy levels for the week ahead of me.

I am now in the zone, and everyone in the gym can see that I am in great shape, both mentally and physically.

I came into camp weighing 159lbs, and I have dropped 11lbs over the last five weeks.

I am currently 148lbs, and my target was to leave here at 147lbs; so all is precisely on point.

When I get back to London I will have three more weeks until I fight Nigel Wright. All the hard work will have been done and I will just keep my strength and cardiovascular conditioning going. My UK trainer, Dave Brown will complete my preparation with technical and speed work.

People think I’m looking better than ever and I’m feeling in supreme shape.

Nigel Wright has earned a good reputation in Britain amongst his peers, but without a hint of complacency, I just can’t see how he can beat me.

In terms of technical ability, Power, Speed, Experience, ‘Chin’ and Conditioning, Nigel comes in second place to me.

Nutrition in sport, but especially in boxing, is just as important as the training you do. If you eat junk food your body will produce junk, garbage in – garbage out.

Learning about nutrition should be standard for all athletes. As the food, vitamins and sports products you put in your body on a regular basis can give you as much as 10% increased performance over your rivals, who are not as disciplined.

I am currently using High5 bars, gels and drinks. Wellman Sport and Wellman Immunace are two Vitabiotics supplements that I use on a regular basis and the results are there for all to witness.

Before my fight I will be attending the Boxing Board of Control’s Annual Boxing Awards and also The Mayor Cup, which is hosted by All Stars Boxing gym at the Porchester Hall in Bayswater, London. This will feature some of England’s best amateurs and future professional champions. London‘s Mayor, Boris Johnson, will be in attendance.

Controversially, Juan Manuel Marquez has hired strength conditioner, Angel Hernandez to help him prepare for his fight with Manny Pacquiao.

Victor Conte, the founder of BALCO pleaded guilty to conspiracy to distribute anabolic steroids and money laundering, and was consequently sentenced to four months in prison in 2005. This did not prevent some athletes from working with him after he was released.

Pacquiao has his own alleged dramas going on in the build up to their trilogy fight.

Pound-for-pound boxing champion Manny Pacquiao is allegedly cheating on his wife. The Internet and Filipino media have reported that Manny ‘stepped out’ on his wife, Jinkee, with actress Krista Ranillo. Manny and Ranillo have both denied an affair.

Manny and Krista co-star in the upcoming movie “Wapakman” and are said to have began their relationship on the set.

The latest allegations of Pacquiao’s infidelities come on the heels of a 2009 photo of Manny dancing closely with an unknown woman, a 2007 rumoured fling with actress Ara Mina, and his 2006 admission to an affair with Joanna Rose Bascoa, with whom he allegedly has a child.

In our world of social media and the internet, there are very few ‘well kept’ secrets; everyone with a Smartphone is a paparazzi photographer and a budding journalist. No reputation is safe or untouched.

Floyd Mayweather has said he is willing to fight Manny on May 5th in Las Vegas, when and if Manny beats Marquez.

On current form I think Manny will beat Marquez. In my opinion I think Marquez won the two first fights, but on recent form, I just cannot see Manny losing this fight as Marquez seems unable to be as competitive above 135lbs. This fight is made at ‘catch weight’ 144lbs.

This last weekend was a big night for fights on both sides of the Atlantic. It was a fabulous weekend of boxing.

Frank Warren put on an entertaining show at Wembley Arena, where my last two fights have taken place.

George Groves beat Paul Smith in the second round with a peach of a punch. George Groves has a very good team behind him. Frank Warren knows how to guide fighters to a world title. Adam Booth and David Haye have been there already so they know what steps George needs to make at the right time. George will get a world title shot. It will be down to him whether he wins it or not. James Degale is in a rush for a world title shot, where George is more patient and willing to bide his time.

Where does Paul Smith go from here? He has lost two fights against talented pros but novices all the same. James and George had under fifteen fights and both won by stoppages over Paul. Paul may have to drop to the 160lb division to re-launch his career. He is too young to call it a day, but at 168lb his options seem to be very limited.

Michael Katsidis and Ricky Burns put on a very good display of boxing. The classic ‘boxer versus puncher’. Burns proved he is world class, and I actually think he has a good chance against WBC world champion Brandon Rios. Burns could be in line to fight 135lbs number one Marquez for the world WBO title in 2012.

Frank Warren has not lost his knack at putting on entertaining shows in big arenas across the United Kingdom.

In Canada, Lucien Bute beat old warhorse, Glen Johnson, in a dull fight. The two top 168lb fighters, Carl Froch and Andre Ward, face each other next month. Bute will need to fight one of them to prove himself, as he has been defending his title against ‘B’ level opposition whilst Ward and Froch have fought the world’s elite.

In Mexico, James Kirkland pounded out Alfredo Angulo. What a fight!! The first round was a slugfest and the best one round action I have seen in 2011. Kirkland spent time in jail for gun possession, and was knocked out upon being released from prison in his comeback fight.

He split with long-time trainer, Anne Wolfe, just beforehand, and that is seen as the reason why he lost. Angulo dropped Kirkland within the first 30 seconds and it seemed like ‘deja vu’ for Kirkland. Angulo punched himself out, and Kirkland came back later in the round to drop and nearly finish Angulo.

Kirkland ground down Angulo to win by a TKO in round five. He’s back. This win was an eliminator for WBC 154lbs champion, Saul Alvarez’s title.

Kid Chocolate handled business, beating Scotsman Craig McEwan on the undercard. I met Craig at the Wildcard gym back in 2009. Former Scottish boxer, Gary Young, was also there. Now Gary trains Craig back in Scotland. This was Craig’s second straight loss after losing to Andy Lee.

Will Golden Boy Promotions stand by Craig or will he be released from his promotional contract? Whatever happens, the 160lb Division is alive and kicking in Britain with Martin Murray, Matthew Macklin and Darren Barker. So Craig could get back in the mix there.

Its four weeks before my title defence and I’m absolutely in the zone.