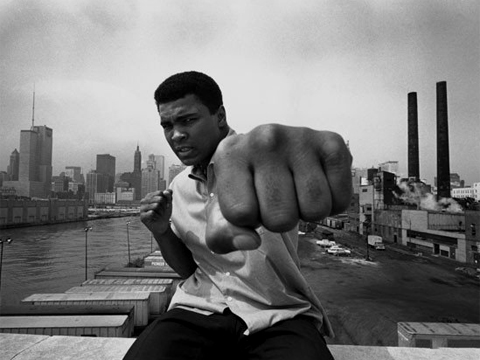 This week is the 70th birthday of the greatest sport’s man of all time, Muhammad Ali.

It is indeed our privilege to have had him as a role model and inspiration in our lifetime.

Muhammad Ali was the third of three ground breaking and brilliant, black heavyweight world champions. Ali followed Joe Louis, and Joe Louis followed Jack Johnson. These three unforgettable heavyweights, who in their time and in their own distinct ways, made huge impact worldwide.

I was mesmerised when watching Ali when I was a youngster, and you couldn’t help but notice his massive confidence and self-belief.

He could inspire anyone and everyone.

When I told my father I wanted to be a boxer. He got me videos of Sugar Ray Robinson, Willie Pep, Henry Armstrong and the man himself, Ali. He said I needed to watch the very best, and I did just that.

To be the best you have to learn from the best and many of these great fighters inspired Ali himself.

He was more than just a fighter. He represented many of those who had little representation during the civil rights struggles of America in the 1960’s.

Ali also stood his ground for his religious beliefs, choosing provocatively and bravely, not to go to war for America. He famously said “why would I kill people who look like me for the man who calls me a nigga at home”.

It took a very strong man to make that stand, and in the end it was proven to be the right move, as the nation turned against the government and the unjust war in Vietnam.

Muhammad Ali who is known as “the Greatest” was born Cassius Marcellus Clay on January 17th 1942 in Louisville, Kentucky. He has fifty six victories in sixty one bouts with thirty seven KO’s.

Muhammad Ali had memorable fights with Joe Frazier, George Foreman and Sonny Liston. The ‘Thriller in Manila’, ‘The Rumble in the Jungle’ and ‘The Fight of the Century’ will forever be remembered.

Joe Frazier, Ali’s nemesis recently died at the age of 67. They will forever be linked together.

Muhammad Ali trained at Gleason’s gym in Brooklyn, New York City where I base my training camp. It is continuously inspiring to train at a gym where Ali once put in the hard work that helped him become the legend he is today.

Ali is loved all over the world. Kids who were not born whilst he was fighting are still inspired by him. He was the most special of talents, and a wonderful human being with a big and generous heart.

The heavyweight division is in a disgraceful state at the minute. Our current heavyweight ‘champions’ would not have been good enough to have been Ali’s sparring partner, let alone rival.

Happy Birthday Muhammad Ali – you are the absolute greatest.