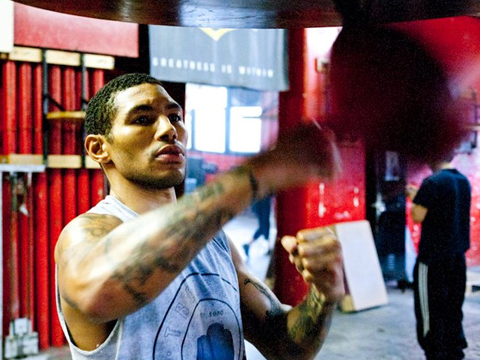 Like all boxers, I’m at my best when I have a definitive goal to train and sharpen up for. I have a low boredom threshold, just ask my team. The last few weeks have been nothing more than OK, as I look forward to a definitive date and a definitive opponent for my next defence.

I started the year focused on my mandatory defence against Nigel Wright, after he had to pull out of our scheduled match in December after failing a brain scan. After further tests, Nigel received the terrible news that he will not be able to fight again for at least a year.

This is tragic news for Nigel, his family and his fans. I wish him the very best of luck and hope things turn out well for him.

Fortunately, this week has been a hectic week for me.

I’ve spent the last month getting myself in shape to begin my eight week training camp in America. I am planning to spend two weeks in the Pocono’s mountains and six weeks in New York City, with a goal of dropping 15lbs in the process and getting myself into peak condition.

I started my week with an interview on Steve Bunce’s Hour on BoxNation TV (watch it here). It was a lively and entertaining session, as is everything Steve gets involved in.

We spoke about my plans for 2012 and he wanted my view on the various big fights in my weight division. It was fast, furious and fun. I thoroughly enjoyed it. Awaiting a call from Ringside to appear with their excellent pundits; Johnny Nelson, Glen McCrory and Richie Woodhall.

UK Swagger TV, the urban TV channel, have been filming me for an episode of their ‘Inspiring Individuals’ series. They were backstage at BoxNation’s studios to capture more exclusive footage.

I have been working on a documentary with NKTV, and they were also at BoxNation. NKTV have been on the case for some 18 months now, starting with my training camp in New York in 2010 whilst I was preparing for my successful challenge for the British title against Lenny Daws.

They will wrap up filming after I successfully defend my British title, hopefully in April. They have interviewed my friends and family, who have seen my struggles and successes over the years. Even if I say so myself, Sky Sports and BoxNation listen up, it will be worth watching (and screening).

On Thursday, I went to Nickel Spa in Holborn, London, to relax and take time out from all the hard work I’ve been doing. I got my usual facial and deep tissue massage.

I left there feeling on top of the world and ready for the hard work ahead in America.

On Friday, I attended my grandmother’s funeral in Paddington, London with a heavy heart. It was sad to see the head of the Theophane family go to a better place. At the same time because of her, I am aware and proud of my St Lucian roots, which led me to fight on the island for Showtime on an Andre Ward undercard a couple of years ago.

The generous support I received from the Saint Lucians was amazing. Currently the Minister of Sports and a proactive MP, Menissa Rambally, in St Lucia are interested in opening an ‘Ashley Theophane Boxing Academy’ on the island. I’m very flattered.

I’m also currently working on launching the ‘Ashley Theophane Foundation’, which will help and support disadvantaged kids, alongside the Treasure’s boxing gym in Paddington.

Death is the inevitable end of our short existence, and the funeral served to remind me to try and appreciate my loved ones whilst they’re here. It’s become a cliché, but ‘life is just too short’ to allow differences and arguments to last too long. It really is worth making up and trying to be as happy as this tough life allows. My grandmother made me realise that ‘hope’ is so much harder than ‘despair’, but it’s so much more fulfilling.

We all deserve the right to have an inspiring dream and continue to drive towards it every day. She was a very special woman.

The boxing great, Angelo Dundee, sadly passed away on Wednesday in Florida at the age of 90. He was one of the best coaches in the boxing business. He was a brilliant motivator and strategist. He will be best remembered for being in the corner of both Muhammad Ali and Sugar Ray Leonard for all of their most memorable fights. Dundee worked with 15 world champions spanning a 60 year career, and he did everything with dignity and humility, he will be sorely missed.

This week Floyd Mayweather Jr. announced that he will be fighting 154lbs world champion Miguel Cotto on May 5th. These are two of my favourite fighters over the last ten years, so I am looking forward to watching them battle it out.

I have one more defence of my British title before claiming the Lonsdale belt outright. Right now, the former European, British and Commonwealth champion, Alex Arthur, is my number one choice, as he is the biggest name currently campaigning in the 140lbs division on the domestic scene.

If Alex is otherwise occupied or turns down the fight, I would like to offer Lenny Daws a rematch, as we had a competitive fight the first time around, and as he was brave enough to give me a chance, I’d like to return the favour.

There is no lack of opponents – every boxing forum on the web appears to have someone else ‘calling me out’ for a shot at the title. There has been some fabulous banter, and of course, some not so clever stuff, but ‘all in a day’s work’ for the champion, as they say. Everyone is entitled to their view.

I have to point out to some, that I have knocked out or stopped all of my opponents in my British title defences.

The start of the year has been a bit of a slow one for me, but the excellent match maker, Richard Poxon, of Hatton Promotions is on the case, working on a date, venue and opponent.

I’m looking forward to hearing some good news real soon and you’ll be the first to know.