LORD OF THE RINGS 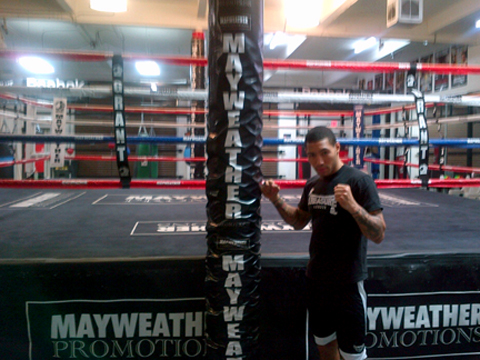 I believe you can do anything you put your mind to. You just have to put in the hard work to achieve it.

I’m now living my childhood dream. Fighting and training in America was always what I hoped for as a five year old kid. Watching Kirkland Laing beat Roberto Duran, Lloyd Honeyghan fighting Marlon Starling, Nigel Benn beating Doug Dewitt and Iran Barkley in America. These British fighters were in some of the most glamorous fights in America, fighting the world’s best.

My whole focus as a kid was about one day fighting and training in America. How was I ever going to achieve that? I would try my hardest, but perhaps I was just fooling myself. Would I ever be good enough? I had no real love for the amateur code, but it was a necessary part of the process to get to where I wanted to go.

If you have no goals, you will have nothing to aim for.

I watched Pernell Whitaker and Marvin Hagler as a young amateur. One was super skilful, and the other was as hard as nails, and would break down fighters. I learned from both of these fighting legends, and they also came from humble origins.

Many people have dreams, but far too many fail to follow them through, or they end up expecting opportunities to land in their lap. I’ve learned that you have to make your own opportunities.

I won a British title eliminator, but the British champions of 2007, would not fight me. I therefore decided to focus on getting fights in the States. I had been training there since 2005, but in 2008 I went there for six months. I knew nothing would come to me, so I had to go where it could happen, and give my all, and more.

I went to training camps with Dmitriy Salita, initially in Florida, and then up into the Catskills, which is in New York State. There I met Stan Hoffman, who has guided and worked with over thirty world champions. He saw something in me that made him believe I could well be a world champion. He got me an opportunity to fight on ESPN in 2008.

My name has been linked over the years with fights with Victor Ortiz, Jessie Vargas, Randall Bailey, Lamont Peterson, Zab Judah, Steve Forbes and Kendall Holt.

I have come a very long way, and it has been a long hard road. My perseverance, dedication, and a fear of failure has driven me forward even on my low days which I now appreciate, everyone gets. Even when I thought I would never fulfil the promise that I believed my talent was worthy of, I kept going. I never missed a shift, and remained determined throughout. I could not give up. I promised myself to see this thing through, no matter what.

At the end of my boxing career I wanted no regrets whatsoever.

I’m proud that sitting in a lonely and potentially soul destroying prison cell back in July 2000, I knew I had to change. I needed a big break, and it came when I was found not guilty. I had been given my chance, and I was going to grab it with both hands. Boxing was my chosen route, I was going to give my all and I’ve stuck to my word. That inner belief and constant faith in myself has started to be rewarded.

Maybe it is the Virgo in me, or maybe it’s my upbringing, but I’m now at a level where I need to continue to always strive for perfection.

My training camp base is New York City. I am more than happy with the work I do at Gleason’s gym. It has helped me get the biggest wins in my career.

Floyd Mayweather is the biggest name in the world of boxing at the moment, and he is in camp to train for his upcoming mega fight with Miguel Cotto.

Something inside of me said I needed to go to the Mayweather boxing gym in Las Vegas, to watch the master at work and see if I could get some tips to add to my personal arsenal.

He did five minute rounds with minimal rest. He finished up his sparring session to go and pound the heavy bag; he then immediately jumped back in the ring to hit pads with his trainer and uncle, Roger Mayweather. He then finished up with some abdominal work. Outstanding!

50 Cent was in the building watching his friend workout. I was one of the very few who were allowed to stay and watch the pound for pound king work out. It was an honour to watch him at work. I had a ringside seat; he was entertaining, and every move was educational to watch.

Watching him at close quarters, he oozed confidence and self-belief. These are two things that a champion must have.

After finishing his workout, Floyd was talking with his family and he noticed me. He asked me what weight I was and what was my record? When he heard my London accent, he asked where I was I from.

Floyd said he would spar with me and test my skills.

That was my first day in the Mayweather gym, and I couldn’t have asked for a better first day.

I again worked with Roger Mayweather on my second day in the gym. It was an honour to work with him and for him to give up his time was very much appreciated.

To be the best you have to learn from the best, and I’ve sparred, fought and watched some of the best boxers of my generation.

I completed twenty seven hours training this week. Being in Las Vegas is the last place I would have ever thought to come for training camp, but just like when I’m in New York. It is a gym and home.

Home in Vegas is the Monte Carlo Resort and Casino Hotel.

I have just one more week’s training at the Mayweather Gym, and every day that I’m in the gym, I push as hard as possible. Training in the pound for pound king’s gym is a real inspiration and motivating in itself.

Many people say that I am very lucky to be living my childhood dream. I have to disagree! I had to make this happen. Luck had nothing to do with it. I have a goal and I work my hardest to make my dream a reality, at all costs.

As the man says, “the harder you work, the luckier you get”.

Anything is possible to achieve if you believe and work hard towards making it happen.

I am the perfect example of that!

An exciting and instructive week, topped off by seeing the best fighter in the world at very close quarters. It doesn’t get much better than that.