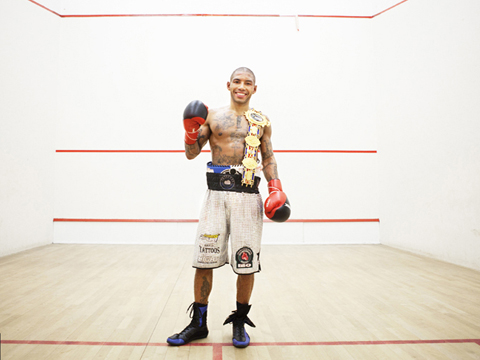 I stand alone in the domestic super lightweight division. Who else can boast of having beaten the former world number three, Delvin Rodriguez, who is currently world number five in the IBF, WBA and WBC and former WBO world champion, DeMarcus Corley, who is currently WBC world number fourteen? I also gave current WBC world champion, Danny Garcia, his hardest fight. My record screams out with rock solid performances that came whilst fighting away on American soil.

I’m probably one of Britain’s best exports at this moment in time.

Yet, I have achieved this without any promotional backing. Imagine what I could achieve if a promoter really backed my talent.

I’ve just had another great camp in America; six tough weeks in New York City at Gleason’s gym and Starrett City, and two inspiring weeks in Las Vegas at the Mayweather Gym.

I’ve sparred with a great mix of fighters, all with completely different styles. I’ve worked with Floyd Mayweather’s excellent training staff; Roger Mayweather and Nate Jones, and with my trainers, Jihad Abdul-Aziz and Harry Keit have got me in very good shape again.

I’ve dropped 12lbs over the last eight weeks. I currently weigh 149lbs, and with seven weeks left before I knock Liverpool’s Steve Williams out at Aintree. I will be in frightening form by show time.

Steve Williams has fought Lenny Daws, our common opponent, who he lost to, and I easily dismantled. Karl Place and Michael Grant are his biggest wins. We are worlds apart on the boxing scene, and he absolutely knows this. He will never reach the heights I have, and he knows that, he is basically a ‘lamb’ that I am going to slaughter. It’s a no-win situation for Steve, as no matter how hard he trains, my experience and ability will be too much for him.

I fight and spar in a different galaxy to Steve. This is the biggest night of his life. It’s his ‘world title shot’. He will give it his all, and come to fight I am completely aware and comfortable with this. Just as Steve’s father told me, after our sparring session, “If Steve could spar you on a regular basis he would be able to beat anyone in Britain”. His whole team know Steve will lose. They will not tell him that, as they are there to help him believe in himself. I really like Steve as a person, so I wish him the best, but after I knock him out on May 19th.

I’ve finished up my eighth week in America just the same way I finished my last training camp; sparring with my good friend and WBC world super lightweight number one, Ajose Olusegun. I always get great sessions with Ajose, and he brings the very best out of me. I remember our gym sessions at My Gym in Finchley. They were special and legendary. Those lucky enough to witness them would tell us that they would be happy to pay an entrance fee to see our explosive, but skilful sparring sessions.

Ajose Olusegun will be the WBC world champion this year. I believe in his talent as much as I believe in mine, and he could match any of the top fighters in the 140lb division.

My trainers Jihad Abdul Aziz and Harry Keit took me on the pads for twelve rounds on Wednesday, which is always a test of my fitness. Our sessions can be seen on YouTube. Even if I say so myself, they are a work of art.

Thursday I finished up with a twelve round sparring session with Scott and Dean Burrell. I have sparred with these twins since 2008 in the lead up to my fight with current WBC world champion Danny Garcia. They have also helped me in the build-up to my fights with IBF world number three, Delvin Rodriguez, British champion Lenny Daws and former European champion Jason Cook.

They always give me quality work.

I had a serious meeting with a very important person in the boxing world this week. I am very optimistic about what was discussed, and am very hopeful about the outcome of this meeting. Until it comes to fruition, I am keeping my lips sealed, but watch this space.

For the next seven weeks, my UK trainer Dave Brown will take over my boxing workouts. I have brought Don Charles back into the fold, to get me into first class shape, and add to Team Treasure’s already world class operation.

Charles has worked with three British champions so far; Dereck Chisora, Ajose Olusegun and yours truly, along with ‘Prize-fighter’ winner, Yassine El Macchi.

No stone is left unturned when I am preparing for a fight. I take every challenger seriously, as I am usually, the biggest fight of their lives, and I know they will lay everything on the line.

I arrived back from New York City at 6:15am on Friday and I was in the gym by 8:15am. I am taking my next defence very seriously, as I’m highly motivated to win by knock out.

This fight can go one of two ways; it will either be an early knock out win for me, or knock out win in the late rounds. A point’s win is just not on the cards.

Believing in yourself when no one else believes in you is the most important asset available when trying to achieve anything you want in life.

If I had listened to the British boxing world when I turned professional, I would not be where I am today.

Boxing Monthly in 2010 named me as the British fighter to make waves that year and they were not wrong.

Boxing News on the other hand, has never believed in my talent, and consistently went against me in big fights, always to be proved wrong when I won.

No promoter would sign me when I first turned professional in 2003, but by 2011, every UK promoter wanted my signature. Even US promoters were showing interest.

Out of all the UK fighters who made their debut alongside me in 2003, only one or two have achieved anything like I have done, or are doing what I am doing.

My boxing record speaks for itself. Believe and you will achieve. If you don’t try, you will never know what you are capable of. My hard work and dedication has got me to where I am in my life. Nothing lands on your lap, but if you work hard enough and you believe in yourself. You can achieve it. I’m doing it and living it. So can you.

That great old sage, Confucius, is on the money again,  “Man who stands on hill with mouth open will wait long time for roast duck to drop in.”