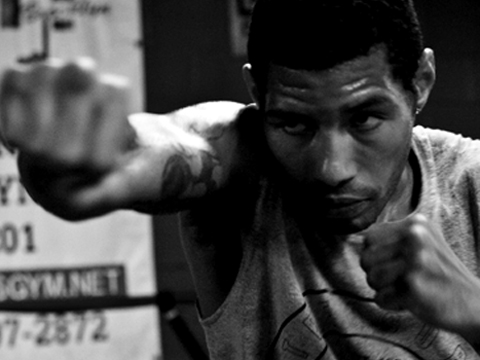 This week, days before our title fight, saw Steve Williams pull out citing a ‘chest infection’.

When I challenged Lenny Daws for the title, I was sick in bed the week of the fight. I was bedridden up until the day of the weigh in. It meant that much to me, that I would have rolled out of my coffin to fight Lenny.

It was very disappointing not to fight Steve, as I was mentally focused for battle with him, but I had this same situation with my last fight, when Nigel Wright pulled out of our fight due to a failed brain scan.

Southern Area and British Masters champion, Darren Hamilton, has stepped up to the plate, and I thank him and his manager, Spencer Fearon, for that.

Darren Hamilton to me has the better record. Darren has beaten two time British title challenger, John Watson, a couple weeks ago. He is the only man to stop Peter McDonagh. He has also beaten Dave Ryan, who Adil Anwar fights on Saturday. Darren Hamilton deserves the British title shot more in my opinion. I have never taken the easy option.

Darren will come to fight, and I am prepared for a hard night at the office.

He may be a 6-1 underdog, and I may be a 10-1 on favourite, but boxing is littered with upsets, especially ‘late notice’ ones, so you can never take anyone lightly.

His handler, Spencer Fearon, awarded me with a trophy at his ‘Hard Knocks’ promotion last March for my victory over Lenny Daws. That night Darren became the first man to stop McDonagh. Even Lenny Daws and Britain’s only World amateur champion, Frankie Gavin, could not achieve that feat.

That night, I announced in the ring that I would give Darren the opportunity to fight for the title, when possible, and I have stuck to my promise.

Spencer called me before my Ben Murphy fight to wish me his best. We will put our friendship aside for this fight.

I’m expecting a hard fight, but there can only be one winner and that is me.

Steve Williams is deluded if he actually believed he could beat me in our postponed fight. He needs saving from himself. Look at his record and look at mine. There is no competition.

Just like Lenny Daws, Jason Cook and Ben Murphy he would have come storming out. It was the biggest fight of his boxing career. Just like them he would have been systematically broken down.

Fighting Steve Williams in Liverpool didn’t excite me anything like my previous fights in America have done. WBA world number four and world title challenger, Delvin Rodriguez, former WBO world champion, DeMarcus Corley and current WBC world champion, Danny Garcia, are stand out names on my record and in the world of boxing. I’m looking forward to adding some more big names to my record in the near future.

I was offered an IBF world title eliminator on June 22nd in California against Josesito Lopez. Kendall Holt was due to fight him, but for whatever reason he is not now. The timing is obviously terrible as I am fighting on Saturday.

There are big fights stateside awaiting me, which is exciting and motivational. How many British fighters get the type of offers I’m getting on such a regular basis? I am obviously held in high esteem in America, as over the last three weeks, three of the world’s biggest promoters have wanted to showcase my skills on the big stage.

After I win the Lonsdale belt outright, I will be able to accept these opportunities. I’ve made a huge sacrifice to be British champion.

The 140lb division is alive and kicking, with some fantastic fighters currently campaigning on the world scene, I am looking forward to getting back onto it.

Ricky Hatton has promised me some major fights in the division, and now as my British title reign is coming to a natural close. There are some exciting times ahead.

Something I can sink my teeth into once I dispose of Darren on Saturday.

The British Boxing Board of Control’s Robert Smith has stated that I have to fight mandatory challenger, Steve Williams, in order to win the Lonsdale belt outright. I was looking to fight Marcos Maidana in Las Vegas, September 15th on the undercard of Saul Alvarez’s fight.

The sacrifices I have made to own this Lonsdale belt outright has been frustrating at times, but when I achieve that feat there will be no looking back. America keeps calling for me to come back. I’m very excited about the big fights stateside in the future – I can’t wait.

Beating Steve was a formality in my mind. The result was already foretold. I was looking forward to getting it over and done with.

I’ve spent fifteen weeks getting prepared for my fight on Saturday. Eight of those weeks where spent in America, learning from the pound for pound king, Floyd Mayweather himself, and at Gleason’s gym under the expertise of Jihad Abdul Aziz and Harry Keit.

Harry will be in my corner on Saturday night with Don Charles. Harry has been in my corner for all my major fights. Delvin Rodriguez, Danny Garcia, DeMarcus Corley, Lenny Daws and Jason Cook.

Darren Hamilton will be a harder fight than Steve would have been, but I’m fully prepared and ready!

I weighed 141lbs the morning before the weigh in, so my weight is on point.

I am focused on getting rid of Darren Hamilton on Saturday then I can sit down with Hatton Promotions and see where we go from here.

Just this week Ricky Hatton said he believes I deserve a world title opportunity, and he definitely knows what he’s talking about, so that is the end goal.

I will be appearing on the lively and always opinionated, Steve Bunce Hour on BoxNation at 8pm on Monday 22nd May with his two championship belts.