THEY SAID IT WAS ALL OVER 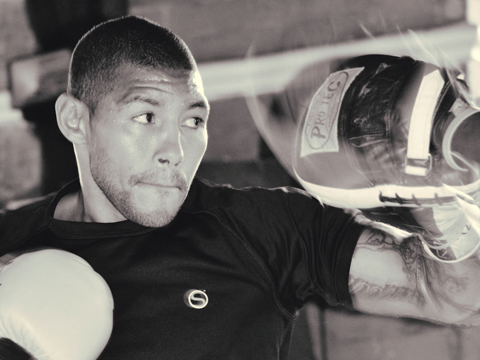 If we ever needed convincing, then London 2012 did just that – British boxing is certainly alive and kicking.

There are some inspirational British fighters doing great things, or on the verge of achieving something special. The coming season will still be very interesting, despite SKY cutting their boxing coverage by half, and (dangerously) choosing to work only with one promoter in Eddie Hearn. Monopolies are never good business practice, but Eddie Hearn is trying to positively continue what his father, Barry Hearn, accomplished with Matchroom Sport.

Healthy competition is always a good thing; just ask us boxers. All the great champions are borne out of great local rivalry; Ali/ Frazier/Foreman to Hearns/Hagler/Duran/Leonard to Benn/Eubanks/Watson. Calzaghe suffered from no real meaningful rivalry – ‘Nuff said.

Eddie has some good fighters on the world stage in Carl Froch and Kell Brook, but who else is coming through?

Carl Frampton’s manager, Barry McGuigan, would understandably have you believe he is the next coming of Roberto Duran, but it is still really early ‘untested’ days yet. Darren Barker is an obvious talent, but has yet to win on the world scene. Eddie seems to be well-liked in the industry, and will be doing his best for his fighters.

Frank Warren is arguably, our most successful British promoter and manager of recent times. He has two WBO world champions on his roster, in Ricky Burns and Nathan Cleverly. Nathan will have to go America for the mega fights; Tavoris Cloud, Chad Dawson, Bernard Hopkins and Jean Pascal are at the top of the tree in the 175lb division.

Ricky Burns has gone from strength to strength, and has done great things with his career. He has shown through hard work and focus, anything is possible. I would love to see a fight with him and Adrian Broner, hopefully it will happen soon.

David Haye and Carl Froch are the best fighters in Britain at the moment, without a shadow of a doubt.

Carl is a warrior who will fight anyone, anywhere, anytime. He is always in great condition, and he gives 100% all the time. No British fighter in history has fought the consistently high level of fighters he has – back to back.

David Haye told me when we were both 15 year old amateurs, that he would become world heavyweight champion. He has backed up his words with big actions, and he is a massive inspiration to me. I felt very proud when he beat Valuev for the WBA heavyweight title.

There is much more to come from both of these excellent British fighters.

Ola Afolabi is a Londoner, but not very well known in Britain. He has achieved a lot on his travels, fighting in America and Germany. He has come close to beating world champion, Marco Huck, twice. He will definitely be world champion one day. A little positive help with his marketing and communications could do wonders.

Tony Bellew is a proud Scouser, and a very good fighter, who can box and fight. He dropped a close decision to Nathan Cleverly last year, but he is now back on his world title journey. I would love to see him in big fights against Cloud, Pascal and Dawson. If he is willing to travel stateside, those fights could be made and maybe he could win. Why not?

Kell Brook is a skilful fighter, but showed a rather poor defence and a little lack of conditioning in his last fight. He’s so much better than that, and that might just be his defining fight, that propels him forward with that necessary learning. The ‘balls are in his court’.

Kell has some potentially massive fights that could be made at 147lbs, with the likes of Devon Alexander, Paul Malignaggi, Manny Pacquiao, Timothy Bradley and Randall Bailey; who are all competing in that division. Is he good enough to beat those I just mentioned? I guess we will find out soon enough.

James DeGale and George Groves are following (carefully) in the great Carl Froch’s footsteps. One is European champion and the other is British champion respectively. I believe they could both win a world title in time, if they are prepared to take a few well calculated risks abroad.

Brian Magee has been doing some fantastic things quietly ‘under the radar’. Perseverance and determination can make all of us (ordinary) human beings achieve against the odds. I feel Brian’s story has more positives to come.

Two time world champion and Olympic silver medallist, Amir Khan, is still only 25 years old, and has achieved a hell of a lot for someone so young. He gets a lot of unfair criticism in my eyes, but he has achieved more than most fighters have the opportunity to achieve in their whole careers. He is probably not even half way through his career yet.

Amir will be a world champion again. How many British fighters box in Vegas and win? Let me help you here – not many!!!

Amir clearly struggles with the undeserved hate he receives, but (in my very humble opinion) he should take it as a huge compliment, and turn it into positive energy. Jealously comes in all forms. We all lose in sport, but that makes the beauty of coming back, and proving the doubters wrong, ever so sweet.

British Boxing has some excellent fighters. I’ve mentioned just a few of them, but there are many more that are and could be coming through, but we need the positive environment afforded to the Team GB amateurs for the professionals.

Everyone one of us has dreams, and if we are trying to turn our dreams into reality, why not show a little support and love, instead of trying to bring us down or detract from our honest efforts..

London 2012 tangibly demonstrated what can be achieved in a more positive environment.

Team GB showed the nation that we have some fantastic athletes on these shores. All sports require support and investment, especially at grass roots level.

As a team you can achieve so much more than as an individual. All these great British fighters I’ve mentioned have a determined and professional team supporting them. Maybe they are not seen or heard, but they are there in the background doing a great job, and that only instils confidence and drive. We all need support, especially when things are not going so well.

Our amateur boxers had one of the best ever Olympics for Britain, and Anthony Joshua has already said that he is staying amateur, and turning his back on the potential of ‘fame and fortune’ for now, because of the great team spirit and support that is at the heart of our amateur system.

Carl Froch and David Haye did not achieve their goals on their own, even if they are the talent and ‘figure heads’ of the operations – we are all better as part of a hard- working and focused team.

BoxNation, Channel 5, Premier Sports and Sky Sports will all be showing boxing this coming season. We have a fabulous season ahead of us, and I intend to play my full part in this.