YOU GET WHAT YOU GIVE 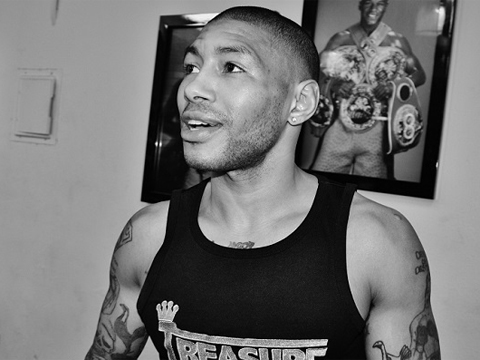 I’ve now been in Las Vegas for three stimulating and instructive weeks.

I’m enjoying the first class training and some great sparring sessions at the Mayweather Boxing Club.

I kicked off the week by sparring with world number 15 Vernon Paris, this was followed by then sharing 13 rounds of sparring over two days with two weight, five time world champion, Celestino Caballero.

Floyd Mayweather normally spars for an awe-inspiring five minutes or longer at a time. Celestino wanted us to do that on one occasion. We completed multiple five minute and six minute rounds of sparring.

That is truly deep end stuff. Sink or Swim! Thanks to my great conditioning I swam hard, but it was really tough. No champion athlete settles for easy training. That is what separates the best from the rest. I’m learning from some great champions, who are the quite simply the best.

Celestino Caballero is the 11th world champion that I’ve shared a ring with through sparring; Joan Guzman, Argenis Mendez, Yuri Foreman, Paul Malignaggi, Elio Rojas, Joseph Agbeko and Ricky Burns are some of the others.

I’ve completed 24 hours training this week. 12 of which was at the Mayweather Boxing Club, the other 12 hours was spent on the roads of Las Vegas and at the 24 hour fitness complex.

I’m now looking forward to my next fight in the States, especially after such intensive sparring here.

The old dog still has much life in him yet.

Ishe Smith had a victory party over the weekend to celebrate winning the IBF junior middleweight world title. He is also the first Nevada native to win a world title. He’s a great inspiration to many fighters, to keep pushing towards your goal even when times are tough. He is a very positive role model!

The Money Team and Mayweather Promotion fighters are all a good bunch of guys. I really love my time here in Las Vegas.

Watching Floyd train in person can only add to your game. He’s the number one boxer in the sport, and there is a clear reason for it.

US Olympian, Errol Spence Junior, has been giving Floyd some good sparring sessions this week.

May 4th is ‘May Day’! I expect Floyd Mayweather to finish the night 44-0 when he is victorious against Robert Guerrero.