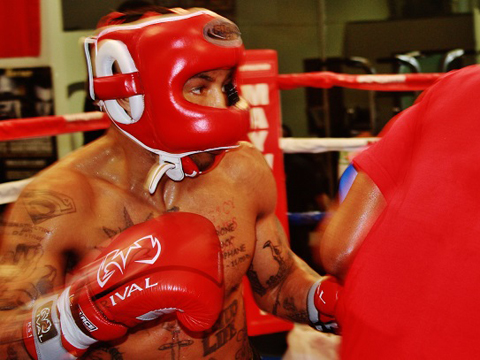 I’m into week four of my current stint in Las Vegas and it has definitely been a life changing experience.

I’m working with Floyd Mayweather’s trainer, Nate Jones, and I’m adding some new approaches to my arsenal every day.

I had a testing but great start to the week, sparring five time world champion, Celestino Caballero, on Monday afternoon. We completed 4 x 5 minute rounds with only 30 seconds rest in between, in sweltering 30 degree heat. It was no joke, but exhilarating all the same.

After watching Floyd’s sparring session; Floyd, Leonard Ellerbe, Lanell Bellows and I went out for a run around Vegas. Running with the pound for pound king, the sports number one fighter is a hell of an amazing feeling.

How many fighters can say they’ve done that?

The Mayweather Boxing Club is a hotbed of competitiveness that attracts some of the world’s best fighters, including world title challengers Sebastian Lujan and Mike Jones, world champion, Ishe Smith and world rated fighters J’Leon Love and Badou Jack. They are all currently present in the gym, assisting in creating a uniquely challenging and special environment.

It also attracts some of the world’s best trainers; Nate Jones, Floyd Senior, Roger and Jeff Mayweather. The atmosphere is one made for winners, and everyone is pushing hard!

Leonard Ellerbe told me the other day that I am “watching history in the making.” I tend to agree! That’s what makes this training camp so rare and worthwhile.

I’m definitely not here for a vacation; I’m up early in the morning for a run around Vegas or a strength conditioning session at the 24 hour fitness complex. I’m then off to the Mayweather Boxing Club in the early afternoon for another ‘full on’ shift.

Sometimes I’m here from 1pm to 8pm these are long, tiring but instructive days. I work out hard, then sit, study and focus on Floyd’s training session. I’m constantly learning from the absolute best – what could be better?

I’ve trained in some of the best gyms across America, and they are all intense and huge learning experiences. They are simply the most combative gyms in the world. You are forced to bring your ‘A’ game otherwise you’ll get quickly trampled and side-lined.

I’ve sparred with 11 world champions, and countless world rated fighters. I think all fighters should want to test their ability to the limit, and see what they can really achieve.

If you always stay within your comfort zone, you will probably remain limited and constrained. Set no limit on yourself and your ability, by backing yourself you will quickly find that the possibilities are endless. My career clearly demonstrates that.

With no promotional backing, I’ve still managed to achieve more than most of my fellow British fighters who turned professional at the same time as me, despite the fact that they had a promoter backing them.

As a five year old kid, I grew up watching boxing with my father. I was inspired by some great and brave British fighters; like Kirkland Laing, Lloyd Honeyghan and Nigel Benn who all came over to the States and bashed up the best of the Yanks and those who fought here. Kirkland beat the great Roberto Duran when he was at his most fearsome, in a stunning upset, here in the States.

I’ve worked consistently hard to achieve what I have, and have had to make many sacrifices. Absolutely anyone can achieve their goals, but most fear failure more than they embrace the desire to win. There is no risk-free approach to success, and if you haven’t tasted failure, then you are probably just not trying hard enough. It’s never ever about not failing, but much more about how you recover from failure. You have to buy a ticket in order to win the lottery.

On Tuesday I was offered a fight with Juan Manual Marquez victim, WBO European junior welterweight champion, Serhiy Fedchenko, in Ukraine. Unfortunately it was just too short notice, but it would be a fight that I am so much up for down the line.

My team have tried to make a fight with Ty Barnett for June 1st, but his people appear to be less than interested in fighting me at 140lbs.

I’m currently working and preparing for my next fight, and after 2 months in Las Vegas at the Mayweather Boxing Club, I’ll be bursting to unleash all I’ve learned for my 40th fight and 34th win.

There’s a lot going on at the moment; my long term partnership with Wellman Vitabiotics has brought mutual and tangible success. They have a great range of sports supplements, and if you are reading Esquire or GQ magazine you may see yours truly featured in their (obviously) compelling marketing drive.

I’m also in the April edition of the Tottenham FC magazine, ‘Hotspurs’, it can be bought at all good retail stores. I’m a very proud Spurs fan, and I had the undeniable pleasure of being interviewed by the house magazine.

We are currently third in the English Premier League and I’d love to finish this season above our London rivals Arsenal and Chelsea.

Whilst extremely working hard here in Vegas, it helps that Spurs are playing such attractive football, and at last showing the belief of true winners.

Come on you Spurs!