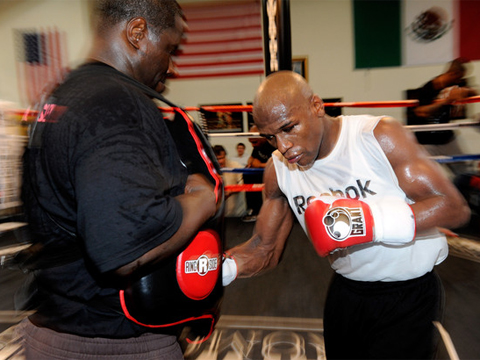 My father always told me not to follow anyone, but to walk my own path in life.

This long lasting and rock solid advice has seen me fight in five countries, picking up four championship titles and stacking up 33 wins. This year is my tenth anniversary as a professional boxer, and what a way to start the year.

Working with Nate Jones has been a great and special learning experience. He is one of the best trainers in the world.

Floyd doesn’t work with him because he is ‘pretty’, despite the fact that he always shouts out around the gym just how pretty he is, and how ugly we all are.

Roger Mayweather and Nate Jones make up the unbeatable partnership that has helped Floyd stack up 43 wins and no defeats over seventeen years.

I believe Floyd can get to 50-0 and then retire, beating Rocky Marciano’s 49-0 record. The great fighter that Floyd is, he never looks beyond his next fight. “One fight at a time” he told me during our road work around Las Vegas.

Floyd’s recent documentary “30 Days in May” aired on Showtime here in the US, on Wednesday night at 10pm. It was a behind the scenes look at his life; interviews with his family and friends, whilst following Floyd around the United States.

For those of us privileged to see him ‘up close and personal’, he is a truly inspiring athlete and individual. He dreamt that he would be living the life he is living today. He has always been ambitious and hungry, coupled with hard work and dedication he has become the best fighter on the planet.

I’ve been sparring some of the best fighters in the world at the Mayweather Boxing Club, and just like my years at Gleason’s Gym in Brooklyn, New York, I really come alive and thrive when in the ring with the world’s best.

Two weight world champion Celestino, has been sparring with me exclusively for the last three weeks. He “loves the work” we do in the ring. We are pushing each other hard and learning loads from each other.

On April 20th he fights for the first time in 18 months in Panama, and I’m happy and honoured that he has enjoyed trading punches with me. It is some of the hardest sparring I’ve ever done; working through five minute rounds instead of the normal three minutes.

Celestino is a five time world champion; he is a slick and powerful boxer. It is a compliment that a fighter of his calibre sees the talent I have in me, and has no fear about mixing it up and going for it. I feel exactly the same.

I also sparred with WBO world number six, Shawn Porter. That was also quality work, and I’m sure we’ll do it again real soon.

Sparring and fighting the world’s best is what I was born to do.

Next week I have the Money team’s own undefeated fighter, Mickey Bey to contend with.

As Mike Tyson used to say “come one, come all. I take on all comers”.

My team tried to make a fight with former world number two, David Estrada, on a Sammy Merza Promotion in Illinois for April 26th. I was willing to move up two weight divisions to junior middleweight, which is a huge 14lbs difference to the junior welterweight division I normally campaign at.

The matchmaker said David needed a warm up first. Well I’ve learned to be patient; maybe we’ll get it on in the future. I’m very clear that the result will end the same, with me knocking him out.

World champion, Ishe Smith, had a special BBQ over the weekend in Las Vegas for his fans and supporters. I like Ishe a lot! He does a lot of authentic work in the community, and with special attention for the kids. He is truly ‘the people’s champ’, and I’m proud to have him as a friend.

Afterwards some of us from the Mayweather Boxing Club went for a night of bowling. I’m not used to losing at anything I put my mind to, but on this occasion, I came in last which was very amusing to my American friends.

Sticknmove.co.uk flew in to Las Vegas from Peru for the weekend to get an exclusive interview with me at the Mayweather Boxing Club. As a gesture of thanks, I managed to get them interviews with the world number 6, Shawn Porter and the Money team’s Badou Jack, Ishe Smith, Mickey Bey and Lanell Bellows. We all give, and consequently, we all get. I love it here.

Walking your own path in life and leaving a fresh trail is always harder than following a well-trodden path. The joy of having a dream and then being brave enough to accomplish your very own mission is something different, inspiring and truly satisfying.

I came from the most humble of origins, and found myself dabbling in unlawful activities. I followed the wrong path and paid the price. However, I’m now doing what I always wanted to do as a kid. My hard work and focus proves that no matter where you are from, and whatever obstacles you may face, you can achieve your dreams.

I’m from a troubled and deprived area in West London, but I’m rubbing shoulders with the number one athlete in global sport.

Life is more than good!

Anything is possible in life, if you’re brave enough to dream, and strong enough to recover from any setback. I am the true and humble symbol of that.