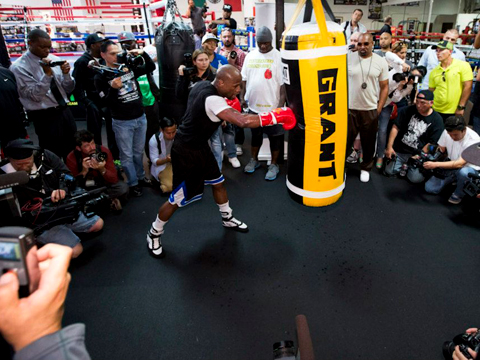 It’s been yet another great week in Las Vegas. I have to say it feels like I’m starring in a movie, but it’s my life right now. I’m loving and enjoying every single minute and making the very most of my time here. It’s a shame it has to come to an end far too soon.

This is my seventh week in Las Vegas and I started it off with a bang.

The Money Team’s Mickey Bey and I continued our highly intensive sparring. I’m loving these tough five minute rounds with only 30 seconds rest.

Eddie Mustafa Muhammad said to me after my sparring session with Mickey, “you can’t get this kind of sparring in the UK.” I tend to agree!

Floyd Senior told me “No one in the gym at Mickey’s weight can give him that good work.”

Two of the best trainers in the world, appreciating my talent. What more can I say!

Eddie, who also trains world champions Ishe Smith and Chad Dawson, took 10 of us, including The Money team’s J’Leon Love, Badou Jack and Luis Cuba Arias to Mount Charleston, for a 9km morning run on Tuesday and Saturday morning.

We started at 5000 feet rising to 9000 feet above sea level. It was snowing and cold up there on Tuesday. Tough conditions build tough fighters. It was a 50 minute battle, but we fought through it. It was hard but rewarding work.

Nothing worthwhile comes easy in life. You have to put that work in. WBC world champion, Chad Dawson also came with us, as he is defending his title against Adonis Stevenson in June. Training with and amongst the world’s best has been a great experience, and one that I feel comfortable with.

Wednesday was Media Day at the gym for all The Money team fighters and Floyd himself. The gym was packed with reporters from all over North America. I had a few interviews with some reporters who were interested in what my current and future plans are.

Floyd Mayweather spoke to the journalists, and then went to work; hitting the mitts with Roger Mayweather, followed by the body bag with Nate Jones. He pounded the heavy bag and then went straight on the speed ball. This was followed by strength conditioning exercises and skipping, which finished his workout.

The Media Day was closed off by Floyd doing some television interviews. Floyd is truly a rock star. Seeing how he is and how he treats his people, I know he deserves every bit of the success that he has achieved.

He never forgets to mention Leonard Ellerbe and Al Haymon when praising his team. They have played a big part in his success. Any successful business has a great team working together behind the scenes.

I headed down to the D on Freemont Street to watch an outside boxing tournament after The Media Day. I had met boxing legend Roy Jones Junior and two time world champion Jean Pascal the week before at the Mayweather Boxing Club. I spent the evening watching the boxing with them on their table, which was a great honour and something I would never imagined happening 15 years ago, when I idolized Roy Jones as a teenager. I also met UFC president, Dana White, who was a really nice guy. He generously thanked me for my support.

After nine weeks training in Las Vegas I’m happy that I’ll be making an appearance on Miranda Carter’s Left Jab promotion on Saturday 18th May at the Civic Centre in Essex. For tickets CLICK HERE

There’s so much more to come, as everyone in attendance at the Mayweather Boxing Club has witnessed.