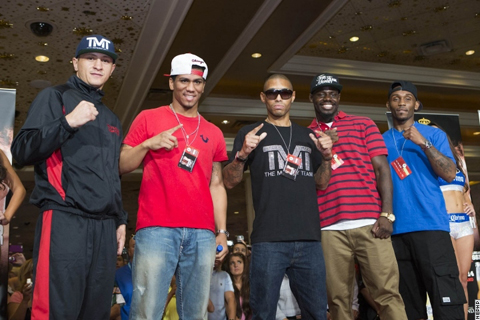 Contrary to popular belief, boxing is thriving right now. Floyd Mayweather has just broken his own record of taking part in history’s highest grossing fight. He has now surpassed boxing legends like Muhammad Ali, Mike Tyson and Sugar Ray Leonard in terms of earnings. He is the highest paid athlete in the world bar none, and the number one boxer on the planet. Some are now even daring to call him the best ever.

As I think about that, the everlasting thrill to be a part of the highest grossing event ever is still a little unbelievable, and to be but a small part of Mayweather Promotions is an achievement in itself, but this all proves what hard work and determination can achieve.

I have sparred with some of the world’s best fighters this year to prove my worth, and this assisted in getting signed by Mayweather Promotions.

To be on the same roster as two weight world champion, Celestino Caballero, Ishe Smith who was a world champion at the time, Shawn Porter, who is now challenging for the world title, world title challenger Arash Usmanee, plus world rated fighters Vernon Paris and Mickey Bey, speaks for itself.

I had the honour of opening up ‘The One’ telecast featuring Floyd ‘Money’ Mayweather vs. Saul ‘Canelo’ Alvarez. 16,000 fight fans were at the MGM Grand Garden arena – 22 million viewers in Mexico – 2 million plus viewing PPV public in America and millions across the world. What an event it was.

This is my first week back in Las Vegas after three weeks back in London, England. It’s been great to see The Money Team fighters at Mayweather Boxing Club; J’Leon Love, Mickey Bey, Luis Arias, Badou Jack, Chris Pearson, Lanell Bellows and Andrew Tabiti are all training hard and are excited about the next Mayweather Promotions boxing event.

I’ve dropped 3.4lbs this week, and I’ll continue to put in the hard work. My work ethic is something that has been praised in London, New York and Las Vegas. Being able to watch Floyd Mayweather work out can only motivate you to step your own game up to another level. All the elite athletes from Michael Phelps, Serena Williams to Floyd Mayweather, are the best not because of talent alone, but the hard work they put in and do what other athletes don’t or can’t do.

Floyd Mayweather gave me my career highest payday and put me on the biggest boxing event ever. I even got to spar 20 plus rounds with him in the lead up to his fight with Canelo.

I’ll now be fighting on the next Mayweather Promotions show this year. Next year will be a huge year for me, and I intend to keep busy, in and out of the ring.

I’ve continued my role as Brand Ambassador for the best of British clothing and sports supplements, Ted Baker and Vitabiotics.

I am fortunate to have the CEO of Mayweather Promotions, Leonard Ellerbe and the number one boxer in the world, Floyd Mayweather, guiding my boxing career.

Success is never a straight line. There are always setbacks but with hard work and dedication, I’ll get that elusive world title belt around my waist.

With my determination and perseverance plus the best of the best behind me, it’s only a matter of time.