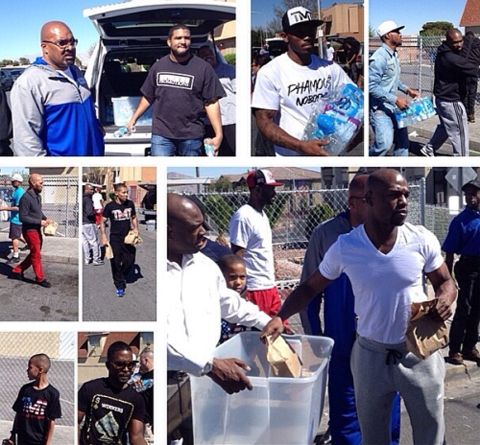 This week saw our boss, Floyd Mayweather, along with the rest of ‘The Money Team’ (TMT) make the time to hand out food and water to homeless people around Las Vegas. It’s something I strongly believe in, taking the time out to assist those less fortunate than ourselves. One homeless person commented how it was nice to see the champ down here.

I’m in preparation and anticipating my next fight in Las Vegas in seven week’s time. It will be my second appearance in this city of glitz and glamour.

I’m pushing harder and harder each week, getting additional inspiration and motivation from Floyd Mayweather. The hard work he puts in is remarkable, but he also has time for his roster of fighters. There is always personal and team advice on how we can improve as fighters. His words are always appreciated, as it’s the best anyone can get in the professional boxing game, taking time out to address us on how he feels we can be better and improve – priceless stuff.

Floyd is already in great shape and as ever walking around at his fighting weight. He is a great example to all athletes worldwide on how to take your career seriously, he is always incredibly hard working and dedicated. I’m privileged and delighted to be part of his team and representing The Money Team in the United Kingdom and across the world.

My next fight is my 42nd and I’m closing in on my 35th win, world champions, Lamont Peterson and Danny Garcia are my targets. I’m just two wins away from being in a ring with them. I believe it’s my destiny, so I’m doing all that is possible to make it possible.

Danny just struggled at the weekend against a tough, determined and skilled fighter in Mauricio Herrera. Herrera is very much like myself, an experienced and talented fighter with wins and losses against the world’s elite. Danny won a tight majority decision in Puerto Rico that many thought he lost, just like many believe I beat him back in 2010. There’s not a month that doesn’t pass that a fellow boxer or boxing fan comes up to me and express their disappointment that two of the judges ruled against me at the time. Setbacks and bad decisions happen in life, you have to continue to move forward. If you want to be the best and fight the best, then there is no risk free approach – you just have to lay it all on the line – every time.

The team started back up Mount Charleston this week. 9000ft above sea level, and 6 unforgiving miles uphill. It is no joke, but it is another reason why I’m always in frightening shape.

I’ve had another productive week in Las Vegas, I completed 24 hours training this week. I put in work; in the fitness centre, boxing gym, running up the mountain, drills and sprints on the track. No stone is left unturned.

With CEO Leonard Ellerbe and Floyd Mayweather guiding my boxing career, I’m in experienced and accomplished hands. I truly have a super team backing me.

As they do all they can for me outside of the ring, I’m laser focused on delivering inside the ring – another week of focus, drive and determination ahead and I can’t wait.

“Boxing doesn’t build character but it sure reveals it”