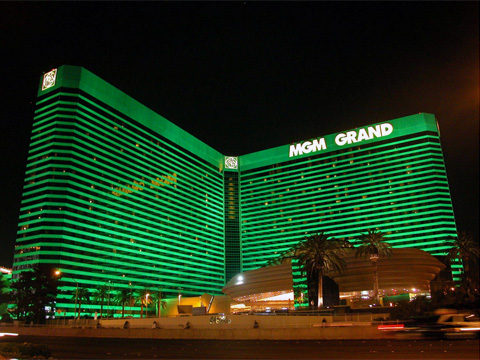 The stage is set at the MGM Grand Hotel and Casino in Las Vegas, with just four weeks to go until the biggest boxing event of the year happens.

Floyd Mayweather vs Marcos Maidana, Amir Khan vs Lou Collazo, Adrien Broner vs Carlos Molina, JLeon Love vs Periban and of course, yours truly. It will be the biggest and ‘baddest’ show on the planet this year by far.

Another hard week’s training completed. The ‘Doghouse’, (which is what the Mayweather Boxing Club is known as) is full of talented fighters. Sparring is always intense and can lead to much soul searching! If you can’t improve and up your game among such talented fighters, you are in the wrong profession.

The Money Team have been in training camp for five weeks now. The pounds are dropping off as we train hard in the unforgiving Las Vegas heat. All our fitness levels are increasing in these high altitude conditions.

This city is well known for being full of sin, but it is also full of dreams. I’m living my dream, and whilst being out here, the dream has gotten bigger. The pressure has become seriously intense, but I really believe in my dream. I believe in myself. The doubters come towards you, especially when big dreams are close to becoming reality, but proving people wrong and transforming non-believers into believers, is what I have come to do best.

I give my all and I lay it all on the line, as Mike Tyson famously said “Destroy or be destroyed” and Marvin Hagler stated “Destruct and destroy”. You can’t play at boxing. We are Spartans, barbarians, gladiators, warriors – all rolled into one. We risk our lives for glory and monetary gain. Many ask is it really worth it? I definitely believe so!

This week I completed my physical, blood work and eye test for my Nevada State Athletic commission license. I passed with flying colours!

So much goes into preparing for a fight and making the big fights happen. Boxing fans and boxing writers will never truly know how it all comes together. Being part of the world’s number one boxer’s team, I am privileged and blessed with the added knowledge and thinking of Floyd Mayweather. He generously shares how he breaks down the business, and how we as fighters can achieve the highest heights in and outside of the boxing ring. Thank you Floyd!

Floyd wants us to be the greatest that we can all be. Being the British representative in Mayweather Promotions; it is an honour and a privilege to represent The Money Team and Great Britain on the biggest stage in the world. I’m benefitting from being backed by a powerful and supportive team.

The stakes are high but hey, we are in Las Vegas. It’s the gambler’s paradise; so it’s all about rolling the dice and taking the chances as they appear.

I was born ready for these great days.