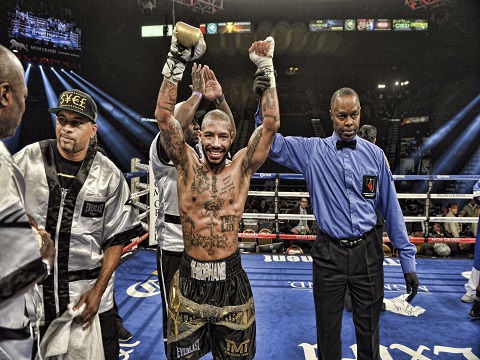 A week has passed, but the joy of victory is still very much with me.

I notched up my 35th win at the MGM Grand in Las Vegas – a world away from West London.

I battled the tough knock out artist Angino Perez. Perez had a 90% knock out ratio. He had been in with good fighters like world champion Richard Abril, and contender, Carlos Molina.

I dropped Perez in the second with a left hook, and the referee stopped the fight with 30 seconds to go in the fourth round. Perez was out on his feet whilst I pounded him with shots. It was a very entertaining fight.

I’ve now fought twice at the MGM Grand in the last nine months. I have the backing of Floyd Mayweather and Leonard Ellerbe. It took me ten years of hard work, battling against the odds to get noticed by these two influential and special men. My boxing career is in the best hands now.

The fight week in Las Vegas was incredible and unforgettable. All boxing fans should take a trip out here and witness the events that take place. The fighter arrivals, the fan workouts, autograph signing, the press conference and the weigh in attended by ten thousand plus fans. Fight night was attended by some of the biggest stars in sports and entertainment.

After a magnificent main event with Floyd Mayweather and Marcos Rene Maidana, the team went back to Floyd’s dressing room and admired his new championship belt. Five star food was being served and we ate together and celebrated the bosses win.

Thirty minutes later we moved on to the post fight press conference. This was my third one since becoming part of the team. Exactly a year ago, after Floyd’s press conference with Robert Guerrero, he told the boxing press that I was his UK fighter.

I trained for 4 months for this win. People only see the one night. Hours, days, weeks and months of preparation go into getting your body and mind into prime condition. Far away from your loved ones, the sacrifice is worth it. One month in London, four weeks in New York City and nine weeks in Las Vegas. That’s near to 400 hours of work for one night. So much work for one night of glory.

It was a pleasure to share the stage with fellow Brits, Amir Khan and Anthony Ogogo. Both are Olympic medallists. I came up the hard way, from the small hall shows in Bethnal Green to the boxing capital of the world – Las Vegas.

Dreams can come true if you have the nerve to believe in them and yourself. Everyone thinks that the route to the top is straightforward but setbacks are going to happen. That’s just life. You just have to dust yourself off, learn from it and continue to move forward.

It’s been a tough journey but I’ve earned respect and many now appreciate just how much resilience and resolve is necessary for this unforgiving journey. They made a great movie about Mickey Ward, I sometimes think – why not me?

From London to Las Vegas. It gets no bigger than what I’m doing right now. Backed by the richest and number one sportsman in the world, Floyd “Money” Mayweather and be part of “The Money Team”.

Here’s to the good life! #TMT

Thank you René Carayol, you believed in my dream and helped me get here.

“Anyone can be critical, it is much tougher but more fulfilling to remain supportive”.