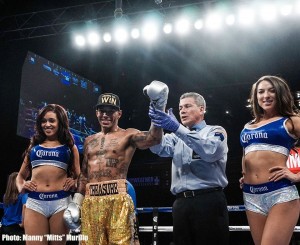 I turned professional back in the autumn of 2002, but I didn’t make my professional debut until the following summer of 2003. I had to wait 8 long months for the opportunity. The four big promoters in the UK at the time were not interested in taking a chance on me; Mick Hennessey, Frank Warren, Frank Maloney and Barry Hearn all passed on me.

Years later it would make me feel good when it was pointed out to me that I had surpassed all the British fighters in my weight category that they had signed.

Serendipity would strike again when they would all offer me a promotional deal after I had climbed the world ladder, getting ranked fourth in the world and becoming British champion.

Determination, hard work and dedication got me signed by Mayweather Promotions. Whatever I go on to achieve, it will mean that much more to me as I know I did it against the odds.

Floyd Mayweather, the number one boxer in the world and the world’s richest sportsman gave me the platform I’ve dreamt about my whole life. As a 7 year old kid I watched Mike Tyson fight in Las Vegas, now I rub shoulders with the fighters I looked up to then. Roy Jones Jr. and Mike Tyson are two of my favourite fighters – they are now associates of mine.

43 fights, 36 victories, 6 losses and 1 draw. By the end of next year it is possible that I’ll have 40 victories. That is a landmark I am chasing as much as the big pay checks and world title fights. In life you have to have goals that keep you focused and hungry.

The third richest person in the world, Warren Buffet, worth a staggering $56 billion and John Landis, producer of Michael Jackson’s ‘Thriller’ were in the gym this week to watch Floyd work out. Every training camp that Floyd has, a who’s who of business, sport and entertainment walk through the doors of the Mayweather Boxing Club.

You always have to remember who believed in you when no one else did. Everyone believes in you or wants to be your friend when you’re “The Man”. The people who are there for you and believe in you when you have nothing are the people to truly cherish.

What someone regards as success and achievements is different for all of us. You have your personal goals that you are pushing for. You know what you are capable of or what you feel you can achieve. It’s can be a very negative world, where people thrive on other people’s sadness and unhappiness. Imagine what people could achieve if they actually helped someone worse off than them? I’ve met people in my life, who helped me when I was expelled from high school, showed me kindness and all they wanted was for me to achieve my potential. Then I’ve met René Carayol who believed I could go from British Champion to the world scene and in the process inspire a generation of forgotten kids, who just like me where and are not supposed to achieve anything in life. Who are just supposed to be statistics on the government’s database?

I told René Carayol, I wanted to be part of The Money Team. I told him I believed I was good enough to get signed by Mayweather Promotions. He gave me the resources to make my dream a reality.

I pushed myself day in and day out to make the grade. 18 months have now passed from that moment and I’ve now been signed to Floyd Mayweather’s promotional outfit for 13 months. I feel blessed and humbled to be a part of Floyd’s team.

I still remember what my goals where as a 22 year old professional fighter. I’ve now achieved it! Now the dream has become bigger. There is no limit on what I can achieve.

Being around men like Floyd Mayweather, Leonard Ellerbe and René Carayol has made me see that. They all believe in me and have helped me push myself to greater heights. I will continue to push myself into unknown and uncomfortable environments. That is where your greatness can be found.

Everything I achieve is a reflection of the hard work my mum instilled in me. She gave birth to Ashley Treasure on August 30th and

Winning on my birthday. The 36th time as a professional is very gratifying indeed.

Every day away from home is one day closer to my goal.

Thank you to everyone who has helped and supported me on my journey.