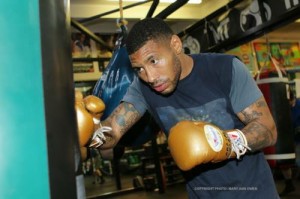 I’ll be making my fifth appearance for Mayweather Promotions on the show.

I’ve had a positive twelve months under Floyd Mayweather’s guidance. Floyd is one of the biggest earners in Las Vegas ever. When it comes to bringing in revenue to the city, he ranks up there with Elvis and Frank Sinatra. No one is currently bigger than Floyd in Las Vegas.

There’s four weeks to go and it is all systems go. One of my coaching team, Jihad Abdul Aziz, flew into Las Vegas from New York City last week to help with my preparations for my 37th victory.

I have to say that the Las Vegas boxing press have been very supportive of me during my time out here. They have noticed my work ethic, which they say instantly stands out even when sitting back and watching the effort that goes on in the Mayweather Boxing Club. I have a very straightforward approach, how can I give anything but my best when I have the world’s number one fighter as an employer? I get to watch and learn from his work first hand. It’s always inspiring and motivating.

The Las Vegas press appear keen to see me back on the big stage and are providing me with great feedback on how ready I’m looking already.

I’m in a weight class that is packed with big names. Good fighters like John Molina, Zab Judah and Humberto Soto stand in the way of my dream match ups with Danny Garcia and Lamont Peterson.

I’m one fight away from being on the big stage. I currently have 36 victories. 50 is the target.

As the weeks go by in Las Vegas, the work always gets harder. The necessary feedback is that I’m getting better. I’m a long way from home; Paddington, London where dreams go only as far as the street corner. My dream has taken me to New York City and then onto Las Vegas. I didn’t wait for opportunities, I went after them and made them happen. I’ve seen hard times and good times. This is boxing, this is life. Training camps are expensive, but a necessity to get the best out of your mind and body. You need determination to go with the hard work and dedication to achieve anything in this sport.

Road work, strength work, boxing drills, Pilates, yoga, swimming, mountain runs and then finish off my week with a 90 minute well deserved massage. Of course it’s hard but anyone doing anything out of the normal has to venture into the unknown.

I’ve beaten British, European, World, African and Commonwealth champions. I’ve fought in Germany, Luxembourg, England, St Lucia, Las Vegas and New York. I’ve fought in small halls and I’ve fought on the biggest stages across the world, the MGM Grand and Wembley Arena spring to mind. There’s not much I haven’t experienced in this boxing game. And perhaps most pleasing of all, I’ve become a bit of a role model and I’m told, a bit of an inspiration for many from similar humble origins to myself.

I didn’t let the surroundings of my youth influence my ambition. I’ve always believed in myself and worked hard to find a different outcome. Even when there was no light at the end of the tunnel, I continued to work very hard. Men like Floyd Mayweather, Rene Carayol and Isola Akay have helped me along the way. Three of the greatest men I’ve come into contact with in my 34 years on earth.

Retiring from boxing is a scary thought. When the bright lights are gone and the show is over, the crowds are no longer cheering – many fighters find this very difficult and stumble on drink and drugs. Some of the biggest and most iconic names have hit upon very hard times.

I push myself as close to breaking point as possible, so I will never have the misery of thinking “if only I’d trained harder”. I’m always focused on being the greatest I can be.

When I eventually retire I really hope to continue to be an inspiration to others, but perhaps in a different way. My target is having acquired a positive reputation in the boxing ring, is to continue positive messages from perhaps the stage, in prisons, in schools, at conventions. Maybe helping the next generation, and the current generation to believe that if they want to be a prime minister or a president that they can actually do it.

My cousin messaged me from London today, to let me know it is her 14th birthday on Thursday. I remember where I was when she was born, not in a good place. It was the lowest moment of my life, but I promised myself that I was going to turn my life around and be the best version of Ashley Theophane possible. With each year I’m proud to say that I just keep on trying to move forward and I just look back at how far I’ve come but I still believe I have so much more to give.

Surround yourself with people who want the best for you – as some of those closest to you may not enjoy your success and may well wish you to fail.

AshleyTheophane @ChrisLloydTV I noticed that cut too. Hopefully it’s not too bad and the fight isn’t postponed. #CaneloPlant

AshleyTheophane RT @TreasureBoxing: Treasure Boxing Club - Southall will be opening on Monday 4th October. We have an “Open Day” on Sunday 3rd October 10a…

AshleyTheophane @talkSPORT @GNev2 @DarrenBent 💯 We’re currently wasting his time. Invest in team to push for Top 4 or let him go.