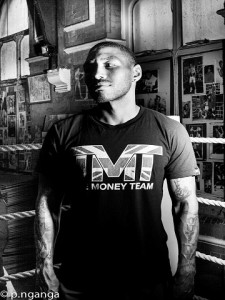 I’m in Las Vegas for my third fight of the year. A total of 8 months of training away from home in the worlds fight capital, under the guidance of Floyd Mayweather, the number one boxer in the world. Not bad to working with the Pound for Pound king.

The hard work, the dedication and the sacrifice is an essential part of the profession I chose. It doesn’t make it any easier knowing what you signed up for.

I’m less than two weeks away from my 37th victory on the undercard of Ishe smith and Erislandy Lara. Two of the very best junior middleweight fighters clash for the WBA world championship. Ishe is the one and only Las Vegas born world champion and he aims to be a two time champion. I believe he can do it.

I’m also in a division surrounded by talent and there are some major clashes I hope I can look forward to next year. I’ve already fought Danny Garcia, Delvin Rodriguez, DeMarcus Corley and Pablo Cesar Cano and I’ve beaten former World, European, Commonwealth, British, English and African champions.

You can’t buy that sort of solid experience. I’ve accomplished more than what was expected of me, but there’s always more to achieve.

Other than my boss, Floyd Mayweather, I bring the most victories to Mayweather Promotions. I crave the big fights; Humberto Soto, Lamont Peterson, Adrien Broner, Lucas Matthysse and John Molina are just some of the names that bring entertainment when they fight, win or lose. I want one of them in 2015.

I’m spoilt, surrounded by knowledge and talent at the Mayweather Boxing Club.

I see talented fighters who never reach their potential all the time. For whatever reason, looking good in the gym and then producing those victories on fight night is a total different thing.  I’ve by far surpassed what the so called British and American “experts” opinion of how far I could really go.

I was recently offered a fight in Russia to fight former undisputed world champion Zab Judah. Square Ring offered me a fight with Zab back in 2008 on the undercard of a Roy Jones fight. A Las Vegas promoter had signed contracts for Zab and me to fight the following year. Mayweather Promotions tried to get Zab and me in the ring last year September.

Fighting Zab Judah has always attracted my strong interest – maybe one day it will happen, but for now I’m focused on next Friday in San Antonio where I will achieve my 37th professional victory.

“Success happens to those who make sacrifices every single day”.