And a Happy New Year! 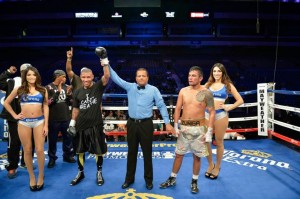 Life is about taking risks. You have to regularly ask yourself ‘what risks have you taken?’ Sometimes you fail, but that’s the only way to find your limits. You regroup and try again. Never let a setback define you.

“In America you can be anything you want to be”. Who am I to argue with that? America has truly been great to me. I came here with a dream, and year by year I have fought hard to make great strides to achieving what many thought I wasn’t capable of doing when I made my professional debut back in 2003. Why put a ceiling on your ambitions?

I have always believed in myself. You have to. If you don’t, no one else will. I’ve been fortunate enough to come across people along my journey who gave my belief a boost with their support and guidance. If you’ve got nothing productive or positive to say, there’s no need to ‘rain on someone’s parade’. Some get off on belittling people, telling them what they can’t do. Why not try to help them and offer advice or positive reinforcement? It costs nothing. They might even surprise you and go on to achieve their dream or endeavour.

My boss, Floyd Mayweather, was ringside cheering me on and offering advice. He shouted out in between rounds.

“I see you’re stealing my moves.”

“You’ll be back to championship fights next year.”

Floyd Snr told me he didn’t know I could box that good, and that my consistency of staying in the gym was paying off.

Floyd’s mother hugged me afterwards and told me she was praying for me during the fight.

After my fight I went into Ishe’s locker room to give him my support. Everything went well during camp. Mentally he was ready. The first half of the fight was pretty close, but Erislandy Lara made some tactical changes which Ishe couldn’t find an answer to. Ishe fought his heart out but on the night it wasn’t enough.

When the best go against each other there has to be a loser. That’s sport. He’ll be back!

After the show, Floyd took everyone out for a meal.

It was a great way to end a punishing training camp.

The day after my fight, back in Las Vegas. I went to the MGM Grand.

It was a victorious weekend for British and Irish fighters in the States.

I’ve been in America just under nine months this year. It’s been hard but sacrifice is needed to achieve anything in life. Three wins out of three.

Four wins over the last twelve months with Mayweather Promotions.

2015 will be interesting with me moving back to the big stage.