Because it’s Worth it 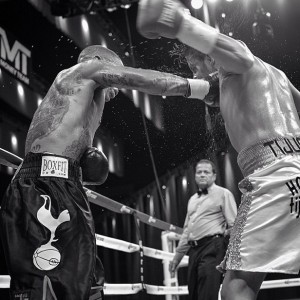 2014 was very hard work, especially with being away from home for so long, but delivered a successful year for my boxing career.

Three victories last year; two of them in Las Vegas – one at the MGM Grand and another at the Palms Casino Hotel. The last of the year was in Texas at the Alamodome, where I put on a master class in front of my promoter, Floyd Mayweather. He was very happy with my performance and shared with me just what I needed to hear, that I’ll be “back on the TV in Championship fights”.

The hard work and the sacrifice will be worthwhile when I’m back in front of the world’s best. There’s no thrill like being matched against men you view as your equal; Danny Garcia, Delvin Rodriguez, DeMarcus Corley and Pablo Cesar Cano are top talent that have brought the best out of me. This is why I’m happy to be based out of Las Vegas, no matter what the hardship.

I went back home to London for the holidays after nine months in training camp in Las Vegas and New York City.

I also had the pleasure of being a guest on the always informative and fun TV boxing show, The Bunce Hour on BoxNation.

I just about had time to hit the first class theatres and restaurants around my beautiful city of London. I even had the pleasure of taking a weekend spa trip to Jersey, to refresh my mind and body for the gruelling and punishing year I have ahead of me.

2015 is here now and I get to start it with a trip to Los Angeles to meet my boss Floyd ‘Money’ Mayweather before accompanying him to Australia on his promotional tour with the rest of “The Money Team”.

Come May 2nd at the MGM Grand, I’ll be focused on bringing home my 38th professional victory.

During my training camp for my 37th professional victory, I had the pleasure of training alongside WBC Heavyweight Champion of the world, Bermane Stiverne.

I even had my Thanksgiving dinner with him, as Bob Ware, the man that wraps Floyd’s hands and is now his cut man, invited us round for dinner with his family.

Bermane lost his crown to Deontay Wilder, the first American Heavyweight Champion since Shannon Briggs in 1996. Wilder can now look forward to clashes with Tyson Fury, Wladimir Klitschko and my friend, David Haye.

I have to remind myself that it has now become just about normal to rub shoulders with some of the stars of my fine sport.

Some people say I’m lucky. That’s nearly an insult to the hard times I experienced on my journey whilst trying to make something of my career in Britain. I found myself left out in the wilderness by Britain’s top promoters; Frank Warren, Mick Hennessy and Matchroom Sports until 8 years later when I won the British Championship and then they all surprisingly found my contact details

This is all part and parcel of having chosen the toughest profession in the most unforgiving industry, yet I’m now really looking forward to a very positive 2015.