The May Day Pay Day 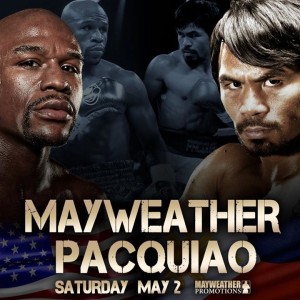 The biggest and most lucrative boxing match in history is about to take place.

Saturday 2nd May at the MGM Grand Arena, here in Las Vegas, Floyd Mayweather will be fighting Manny Pacquiao.

Muhammad Ali “The Greatest” will forever be remembered for the legendary “Rumble in the Jungle” in Zaire. Floyd is set to break all previous records across the world with this event. Floyd is continuing where legends like Mike Tyson, Muhammad Ali and Jack Johnson left off.

Being part of Floyd’s team I’m very privileged to be witnessing something very special at close and intimate quarters. I get to see the things that many fans and the media will never know or see.

It’s both inspiring and motivating. I’m pushing to be the greatest I can be. So fighting the best fighters in my division is my endeavour; the Lamont Peterson’s and Adrien Broner’s are my target.

I’ve fought on three out of four of Floyds events at the MGM Grand. The venue has become normal to fight in for me now. A kid from a deprived area in London that made his professional debut at York Hall in London has now come a long way.

This will be the sixth training camp of Floyd Mayweather’s I’ve witnessed.

Expectations are always high from Floyd for all his fighters to be victorious come fight time. I’ve won my last four fights. I seem to be getting better with age.

This will be my 45th fight over 12 years as a professional boxer. I’ve been IBF world number 3, British champion, won 3 International titles, fought in 5 countries and now I’m promoted by Mayweather Promotions.

It’s been a hard and unforgiving road, but I continue to work hard and believe that those career defining fights will come for me.

Every day you must be prepared and able to perform when the biggest role of your life is presented on the biggest stage.

Floyd announced his fight on Friday afternoon. The internet went into overdrive. TV and Radio stations went crazy announcing that the fight that has been talked about for six years is finally happening.

“To me, it’s just another day. It’s just another fight. I mean, when you just look at the tale of the tape, I have a longer reach, I’m taller, I’m stronger, and I’m more accurate. I think I’ve seen a major change in Pacquiao … I took my time, I made the right move, and I’m just ready to go out there and be exciting. Be smart and be exciting. I mean, he’s a fighter just like I’m a fighter, and he’s a guy that’s out there to win. The only thing I know is to win, so is losing in the back of his mind? Absolutely! Why? Because he probably lost 3 or 5 times before, so losing is in his mind. Losing is not in my mind because the only thing I know how to do is win” stated undefeated pound-for-pound king Floyd Mayweather to Ben Thompson at FightHype.com.

It’s not every question that deserves an answer, but this is the fight that every fan demands an answer to.