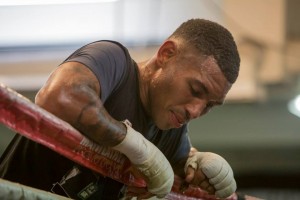 Fight week is at last here. My opponent on Floyd Mayweather’s undercard is Steven Upsher. He fought Floyd’s opponent, Andre Berto, a year ago. Andre is now obviously fighting Floyd Mayweather so a win will bring me nearer to the big fights I’ve been waiting for and am fully pumped up for.

Adrien Broner was scheduled to fight Steven Upsher recently until he was presented with the opportunity to fight for the WBA world title.

After I get through Chambers I’d love to fight Adrien for the WBA 140lbs world championship if he is successful on October 3rd.

It’s been a really great week of sparring. This camp has been 11 weeks long and it’s been yet another positive camp. Perhaps my best one yet.

I’ve sparred Floyd Mayweather, Yuriorkis Gamboa, Mickey Bey, Steve Forbes and some of the best young fighters America has to offer. It’s been hard and challenging, but as I’m now a veteran in the sport, there isn’t nothing I haven’t already seen or experienced.

I’m used to pushing my body hard and I’m used to being alone. Focused on a dream many boxing people in the UK said wasn’t possible. Because I was prepared to be different and believe in myself – they called me “deluded”.

I met Floyd Mayweather over three years ago and he believed in me from the off. He told me “I’ll get you the fights you want but it’s up to you to win”. Six fights later, over the last two years – five wins. I’m certainly getting better with age.

I never put a limit on what I might achieve. I’m the same age as Serena Williams and she’s the number one female athlete in the world. Floyd Mayweather is 38 years old, he’s the number one male athlete in the world. They have many similarities; both are hugely determined and self-driven individuals that are unjustly criticised by the ill-informed. I guess that’s the price of being the best in your generation.

We all learn that you can’t please everyone. If I had taken notice of the negative comments from some of the boxing press, coaches, managers and promoters in the UK all those years ago – I wouldn’t be where I am today.

So I’m ready to go. Steve Upsher believes he’s coming to upset me. As I said we should believe in ourselves, BUT I’ve sparred better fighters than him this camp. I’ve fought some of the best fighters of my generation from the European scene to the world scene; Danny Garcia, Delvin Rodriguez, DeMarcus Corley, Pablo Cesar Cano, Lenny Daws and Jason Cook. All good fighters and all better fighters than Steve Upsher.

We finished the last week of camp with the Floyd Mayweather appreciation dinner at NOVE restaurant in the Palms hotel and casino.

The Mayweather family BBQ was on the Sunday. We work really hard but we make time to have fun in between.

We are ready to rock and roll.

We are at the business end of proceedings now – let’s get this show on the road.