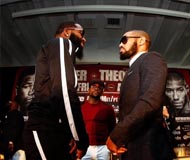 So, we are here in the nation’s Capital. Washington, DC.

I’ve always wanted my career defining fight and Floyd Mayweather has kindly delivered it for me.

The biggest name in my weight division. And of course I’m the underdog, but I wouldn’t have it any other way. I’ve been the underdog my whole life, my whole boxing career.

It’s been a hell of a struggle, but at the same time I’ve had loads of joy along the way.

I became world number 4 against the odds. I became British champion. I have shared the ring with some accomplished fighters like Delvin Rodriguez, Danny Garcia, Pablo Cesar Cano, DeMarcus Corley and Lenny Daws.

I signed to Mayweather Promotions in 2013. I’m very proud of myself.

I now have my biggest challenge, Adrien “The Problem” Broner.

I’m relishing it and looking forward to it, as I believe I can win. I set high expectations of myself.

On Fight night, I aim to make myself proud with my career best performance.

We had the final press conference today. Adrien was his usual self. I kept calm and composed. I’m confident. It’s just about performing on fight night.

The weigh in is tomorrow at 1pm and then battle will commence Friday night at the DC Armory.