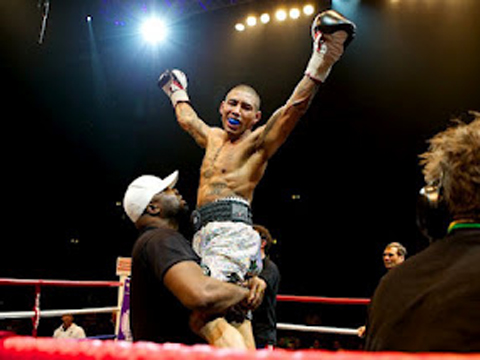 The very best of elite athletes are at their absolute best and accomplish their most amazing feats when no one believes they can.

I had the best year in my nine year career as a professional boxer back in 2010, when I beat world number three, Delvin Rodriguez, won the IBO International title and dropped a split decision to current world champion Danny Garcia – who recently knocked out Amir Khan in four exciting rounds.

I had to come back to America to reignite that flame that burns deep inside me. I haven’t felt this excited since I beat Delvin Rodriguez over two years ago. My passion had been diminished over the last 18 months, as I was not having the exciting fights I crave for; Steve Williams, Nigel Wright, Ben Murphy and Darren Hamilton, just didn’t do it for me.

A great fighter always performs his best against the best, and that was not possible, against that calibre of fighter.

My best performances have always come on foreign soil. I’m a British fighter, but boxing is a worldwide sport and I’m a world class fighter, as my record suggests. Records don’t lie!

I had a great time in North Carolina with my trainer Jihad Abdul Aziz. Dave Brown got me in fantastic shape at the All Stars boxing gym prior to flying out, and Jihad took over corner duties.

The last time he was in my corner was when I beat Delvin Rodriguez, so my fight with Ronnie Warrior was always going to be ‘fire’.

I’m in Scotland to spar with Ricky Burns this week. I arrived back in London on Sunday morning from America, and Monday morning I was on a plane again, but this time to Glasgow. Like all the best fighters, I love what I do, and go to wherever it takes – I’m really a globe-trotting boxer.

I think Ricky has some great fights against the world’s best ahead of him, that could see him eventually moving up to 140lbs.

Kevin Mitchell is a good British fighter. I have watched him spar and he is a talented boxer. He is not quite world class though; getting knocked out by Michael Katsidis, and beating John Murray and Bredis Prescott is not bad at all, but nothing to set the world on fire.

Danny Garcia defends his world title against Erik Morales, and Paul Malignaggi is defending his title against Pablo Cesar ‘El Demoledor’ Cano at the Barclays Centre in Brooklyn on October 20th.

I’ve sparred both Malignaggi and Olusegun at Gleason’s gym. I’ve fought Garcia and I was due to fight Bailey in a world title eliminator in Belgium, back in autumn of 2010.

The ‘best fighting the best’ is a beautiful and necessary thing. There are no losers in these incredible fights. Over the next 6/7 years these are the sort of fights that I want to be part of.

Kirkland Laing is the best British boxer never to fight for a world title, sometimes I wonder if I’ll be in this category when I retire.

I’m back!!! And it feels fantastic.