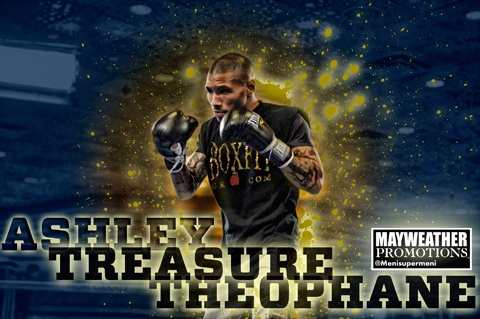 As I look forward to a fresh and positive new year, it has given me the chance to reflect back on 2013 from my perspective.

It has been an exceptional year that met the dreams I had as a five year old child. Many of the ‘experts’ have frequently said that it would not be possible for me to achieve hardly anything over my ten year career. This could have deflected anyone from their goals and dreams, but for me, it has only served to drive my determination to achieve even more.

I still have much more to achieve and have so many youngsters to continue the privilege of doing all I can to be a ‘role model’ for. My life is proof that if you believe and want to be something in life, you can achieve it. You just have to work really hard for it, without ever being put off by mishaps, lack of support or failure.

I have always wanted to be the best I could possibly be, that meant having the courage to pack my bags and get myself to the USA. I wanted to fight in America, moving to fight the world’s best and perhaps become a champion in the process. This would mean having to train in the toughest gyms in the world and spar with the toughest fighters. It was the learning and development I craved.

I knew it would mean leaving friends and family for long periods of time, and being out there on my own. Packing my kit and my dreams and getting on the plane, I knew I would never be lonely, as I had such a clear purpose and mission.

I had the huge and unforgettable opportunity to spar with Floyd himself last year, which was a great experience. Watching up close how Floyd keeps himself at the top of the sport is both incredible and inspirational – he has simply taken boxing to a whole new level.

He has been generous with advice and sound counsel – you can only learn and soak up the knowledge from the nuggets he gives you. If the best of the best is talking, you’d be a fool not to listen.

Floyd has shared his plans for me and what he believes I can achieve. He wants to see me in ‘super fights’ with the world’s best, and he believes I have what it takes to be victorious. I feel very honoured to have this special backing.

‘The One’ is now officially the highest grossing pay-per-view boxing event in history. To the shock of many of the ‘experts’, I opened the televised portion of the show, which is a tremendous feat in itself. I played a part in the making of boxing history.

My ‘take no prisoners’ war of attrition with Pablo Cesar Cano said a lot about both of us. Neither of our teams knew who had won the bout when the announcer, Jimmy Lennon Jr. roared “we have a split decision”.

Four months have now passed and many boxing fans around the world still tell me they felt I won. Whilst no defeat is welcomed, no matter how close or controversial, it does help that in Las Vegas, New York and London my performance on that September 14th evening is still being praised.

Some young boxers tell me I inspire them and I’ve helped them believe they can achieve their goals in life. In sport there has to be a winner and a loser. How you come back from defeat is how any athlete is judged.

After losing to Ali Oubaali on my US debut, I then beat former world champion, DeMarcus Corley. After I lost to world champion Danny Garcia, I moved up a weight division and beat IBF world number 3, Delvin Rodriguez.

I’m pursuing the limit of my abilities, I must discover the greatness that I believe lies within me. Having the backing of one of the greatest fighters ever, will give me that extra push to achieve it.

In boxing, there is no one bigger than Floyd Mayweather and he is my promoter. If he believes in me and is backing my journey – I am not going to argue or disagree?

I work hard, very hard and I push myself harder and harder each year. 2014 is a new year but the goal remains the same, and it’s getting that little bit closer, to becoming world champion.

My promoter, Floyd ‘Money’ Mayweather has won ten world titles over five weight divisions. To be part of his ‘The Money Team’ is a life changing opportunity, but at the same time there is a huge weight on my shoulders. He is the best boxer in the world. An inspiration to millions of fans and people around the world. We represent him every day and especially when we enter the ring. That can only motivate and guide you.

2014 will see me back in the big league. I could be facing any one of the following former world champions: Humberto Soto, Zab Judah, Julio Diaz, Vivian Harris, Kendal Holt and Mike Arnaotis. All very good fighters indeed but to be the best, you have to beat the best.

Setbacks are part and parcel of life. No matter how bad it gets you just have to keep going. The road to the top is never straightforward or easy. Not many even try to get to the top, far too many put the route to their own personal success in the ‘too difficult’ box.

You must roll with the good and bad. That’s what I’ve learnt over the course of my ten year professional career. Never put limitations on what you can be or achieve, as you’ll be surprised what you can really do if you believe in yourself.

As the great man himself once said – “There is no passion to be found playing small – in settling for a life that is less than the one you are capable of living.” – Nelson Mandela