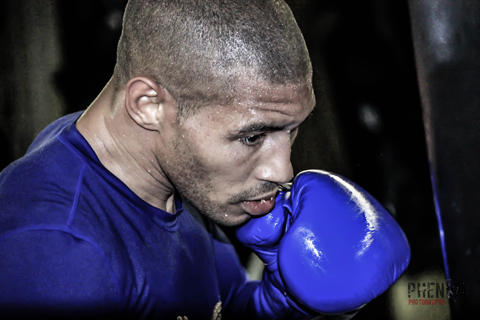 Over the last four weeks I have been in London, New York City and now I’m back in Las Vegas.

I was back in London after nine weeks in Las Vegas, watching and learning from the highest paid athlete and number one boxer in the world, Floyd Mayweather. That was a great experience to train with, and alongside Floyd and his fighters.

My services were requested by former world champion, Luis Collazo, whose team flew me to New York from London. Luis has fought some of the best fighters of our generation in Shane Mosley, Ricky Hatton and Andre Berto. It was the second time we were sparring, and the spectators would have gladly paid to have watched the action.

It was very good to be back at Gleason’s gym in Brooklyn.

Some of the greatest fighters ever to lace up boxing gloves have walked through the doors of Gleason’s gym; Muhammad Ali, Mike Tyson, Larry Holmes, Roy Jones, Marvin Hagler, Carlos Monzon, Pernell Whitaker, Wilfredo Benitez, Julio Cesar Chavez and Alexis Arguello have all trained at this gym. They are the greatest!

I’ve had the pleasure of training there since 2005. That is now eight years. Whenever I walk through the doors when returning from the UK, Bruce Silverglade, the owner always says “welcome home”. This place is my home away from my home at All Stars Boxing Club in London.

I’ve learned so much at Gleason’s gym and I’ve made some friends for life. Many of the fighters there encourage me “to keep on doing what I’m doing”, as it inspires them and helps them push hard towards their own dreams. I try to inspire myself everywhere I go, and when it rubs off on others around me; it’s an amazing feeling and motivates me even more to keep up the hard work, dedication and perseverance.

Whilst in Brooklyn, I had a very interesting meeting with a New York promotional group who are keen to sign me. They believe I am the sleeping giant in the 140lb division and that I am capable of beating any 140lb fighter in the world today. This informs me just how highly I am respected in America. State to state, and coast to coast, I’m recognised and respected. I am seen by many as one of the hardest workers in America. My conditioning has been praised at Mayweather’s Boxing Club in Las Vegas and at Gleason’s gym in New York City.

I’ve set the bar high for myself now, and consistency is now the key. There can be no letting up, if it’s in the ring, on the roads or in the gym. I have to keep pushing myself harder, faster and further.

We ended the week of training in Las Vegas with a 6am run up Mount Charleston. There were eight of us from the Mayweather Boxing Club. It was hard work running 9000ft above sea level. After the run former world champion and world class trainer to champions, Eddie Muhammad treated us to breakfast at Baby Stacks restaurant.

It is good to be back with all the guys in the gym. We work hard together and support each other on our continuing quest for glory.

We are stronger together.